Docs In Progress is a 501(c)(3) non-profit organization which gives individuals the tools to tell stories through documentary film to educate, inspire, and transform the way people view their world.

Docs in Progress is committed to...

Meet the people of Docs In Progress.

In early 2004, Washington DC-area documentary filmmakers Erica Ginsberg and Adele Schmidt decided over dinner that it would be great if there were a space where local filmmakers could get and give feedback on each other’s documentary works-in-progress.  The seeds of Docs In Progress (including its name) are noted down on a napkin. 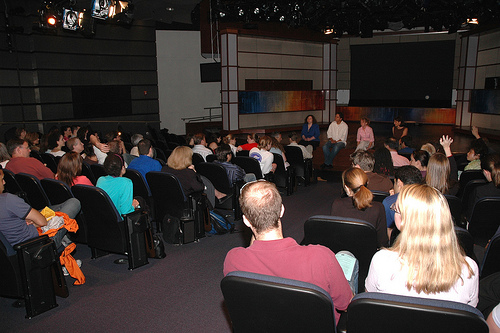 Docs In Progress held its first work-in-progress screening at the Warehouse Theater on 7th Street, NW Washington DC in May of that year.  The films screened were Swing Legends (by Tommy Greco and Emily Schwartz) and Up to the Mountain, Down to the Village (by Chris Billing).  Within a few months, the screenings were attracting an eclectic mix of filmmakers, aspiring filmmakers, and people interested in the topics of the films.  (Incidentally, Greco and Schwartz would go on to get married and continue to make videos about the swing dancing community.  Billing would go on to workshop two more films with Docs In Progress, including Lost Sparrow which ultimately ended up on the prestigious PBS series Independent Lens.)

By the end of its first year, Docs In Progress moved its screenings to George Washington University’s Media and Public Affairs Building, beginning its longest-running partnership with The Documentary Center.  Schmidt and Ginsberg also began offering one-on-one story consultations to filmmakers and held the first Peer Pitch program, giving filmmakers who are at an earlier stage of development the opportunity to get feedback from their peers.  Among the projects at the first pitch is an as-yet-untitled documentary by Joe Wilson and Dean Hamer which would go on to become the Emmy-award winning Out in the Silence.

Less than two years later, Sam Hampton contacted Docs In Progress for a consultation on a documentary he was making about his mother, a civil rights community organizer.  Ginsberg and Schmidt began to provide regular consulting services to Hampton who in turn advised them on how to set up Docs In Progress as a nonprofit organization.

In 2008, Docs In Progress officially became a 501(c)(3) nonprofit organization with Ginsberg, Hampton, and Schmidt as its start-up founders.  It also moved into what became known as the “Documentary House” in downtown Silver Spring and began offering its first class, Documentary Filmmaking from A to Z, introducing aspiring filmmakers to the craft.

Within a few years, Docs In Progress expanded its offerings to include a youth summer camp, a fiscal sponsorship program, a fellowship program, and a community film festival in Silver Spring which would eventually become the Community Stories Festival.  With support from state and local arts and humanities councils and individuals from its community, Docs In Progress was able to hire co-founder Erica Ginsberg as its first Executive Director. Adele Schmidt and Sam Hampton opted not to be on staff of the burgeoning organization, but continued to serve it as teaching artists.  Docs In Progress was also able to expand its contract teaching artist roster beyond the founders.

The organization has received prestigious funding from the National Endowment for the Arts and has been honored by TIVA-DC with a Peer Award for its service to the Washington DC film community. In 2014, Docs In Progress celebrated its first 10 years of programming with “Decade of Docs,” which included an awards evening honoring hundreds of alumni, a distinguished panel on the future of documentary film, master classes on documentary producing, directing, and editing, and a film festival showcasing ten years of documentaries about Washington DC produced by hundreds of Docs In Progress alumni.

Docs In Progress continues to grow. It now offers a Fellowship, a Filmmaker Residency Program, an annual Community Stories Film Festival, and another 40 programs every year for aspiring, emerging, and established documentary filmmakers and people who love to watch and discuss documentaries. In May 2019, it moved into its current space in downtown Silver Spring, Maryland in a partnership with Montgomery County's Housing Opportunities Commission. This space includes offices, an education lab, a screening room, and the same values that have welcomed thousands of documentary filmmakers and aficionados to our community.