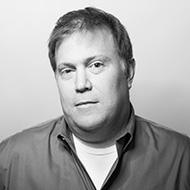 G.T. Keplinger is an associate professor at Stevenson University in the Film & Moving Image Department where he has taught since 2006.  He also serves on the Faculty Council and is the chair of the University Technology Committee.  From 1999-2006, he taught at Towson University in the Electronic Media and Film Department. In his nearly 20 years of teaching, he has taught a wide variety of classes in all areas of film and video focusing mainly on editing, sound design and film and video production.  He earned an A.A. from Montgomery College, a B.S. in Film and Television, cum laude, from Towson State University and a M.F.A. in Film and Electronic Media from American University.  In addition to teaching, he has edited television shows that have aired on ESPN and The Discovery Channel as well as numerous commercials and other projects.  He has done production sound and post-production sound design for films that have screened at numerous film festivals and films that have been distributed on DVD.  He has also shot films that have screened at numerous film festivals and have been distributed on DVD.