Andre Dahlman is a Docs In Progress class and screening alum.  After having festival success with his short film Corner Plot, he applied to participate in the American Documentary Showcase, an international exchange program which brings American documentary filmmakers to show and discuss their work and the documentary filmmaking industry around the world.  Andre and his were selected to go to Tajikistan.  This is his account of his experience.

Two months ago Tajikistan wasn’t even on my radar. Today I know it to be a deeply fascinating and beautiful country full of contradictions and intrigue.

The American Documentary Showcase is a program run by the Department of State’s Bureau of Educational and Cultural Affairs and administered by the University Film and Video Association.  For the past three years the Showcase has sent independent documentaries across the world to cultivate mutual understanding between countries.

Last year I applied to the Showcase with Corner Plot – a 10 minute documentary about a 90 year old man who, with the help of his only daughter, farms an acre of land just outside downtown Silver Spring.

Its been a wild ride.

Before my trip, I knew very little about Central Asia, let alone Tajikistan.  I spent a few weeks reading country profiles and having lunch with friends and acquaintances familiar with the area.  At first blush, its not a rosy picture: Tajikistan is the poorest country in Central Asia, has limited political and economic opportunities, and is still feeling the effects of a protracted civil war which took place in the early 90s.

On June 20, 2011, after a delayed flight and missed connection, I arrived in Dushanbe a day late and a little punch drunk. I spent the next week presenting my film, doing classes, and speaking to local filmmakers. Being shepherded around by the State Department also had its benefits: virtually any question I had was answered immediately and with a great degree of insight. For a curious filmmaker, it was a real delight. 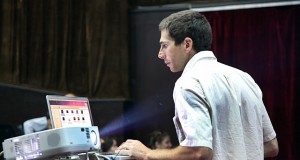 I was surprised how engaged local audiences were with my film and my presentations. On its surface, Corner Plot is very far removed from Tajikistan.  But after a few questions and comments it was clear that the themes of growing old, staying useful, and familial relationships travel across cultures.

I presented  a lecture titled The History of Western Documentary. Tajikistan was part of the USSR for over 60 years and remains heavily influenced by Russia, so audience members were both eager to hear about the history of Western documentary but also disappointed that Soviet Documentary was neglected in the lecture.

My talk focused not just on the documentaries themselves, but also the social, political, and technological forces at play during their production periods. My hope was that by illuminating the circumstances in which the documentaries were made, it would force the audience to consider specific challenges within Tajikistan and how they might overcome those challenges. We spoke at length about the role of documentary in illuminating social issues, and their potential to  record and effect change. In addition to several lively exchanges, the audience thoroughly enjoyed watching some of the West’s best documentaries: Primary, Harlan County USA, Hoop Dreams, and Grizzly Man were all new to them. The real classics such as the Lumiere Brothers’ Arrival of a Train at La Ciotat and Flaherty’s Nanook of the North were already familiar.

I also conducted a presentation called  How to Conceive, Execute and Distribute a Documentary.  The presentation was a mixture of both theoretical – what is a documentary, documentary genres, what subjects make the best documentaries, why create documentaries, etc. – and practical – choosing a team, approaches to research, shooting for coverage, finding your story arc, editing basics, etc.  The audience asked a lot of questions and I spoke to several filmmakers after the formal lecture.  There was a general feeling that, while some of the audience members were very adept filmmakers themselves, it was interesting to discuss documentary filmmaking on a more theoretical and macro level. 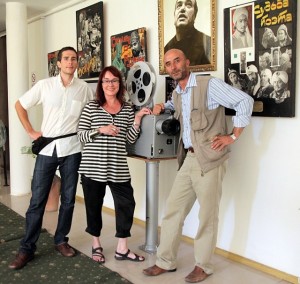 This was also a chance for me to learn about filmmaking in Tajikistan. Three years ago, a Visual Production Law was introduced which dictates all production must be cleared by the government via a cumbersome application process. Politically sensitive material is rarely – if ever – cleared and production is often stymied by government reviews throughout the production process. Larger production associations such as the Association of Tajikistan Cinematographers help guide small producers through the process, but the burden is still very real – especially for independent operators.  Another obstacle is there are very few channels for independent distribution.  Most television is state-run and there are only a handful of independent stations litteredthroughout the country that will broadcast independent media.

All in all it was a fascinating trip. Touring a country with a documentary in tow, engaging local filmmakers, and asking a lot of questions is a wonderful way to visit a country. I left Tajikistan a proud believer in the power of cultural exchange – not only as a means to share my own limited perspective, but as a means to broaden my viewpoint as well.

More information about Andre’s trip can be found at www.dcdocumentary.com