Submit Your Film for a Work-in-Progress Screening or Roundtable 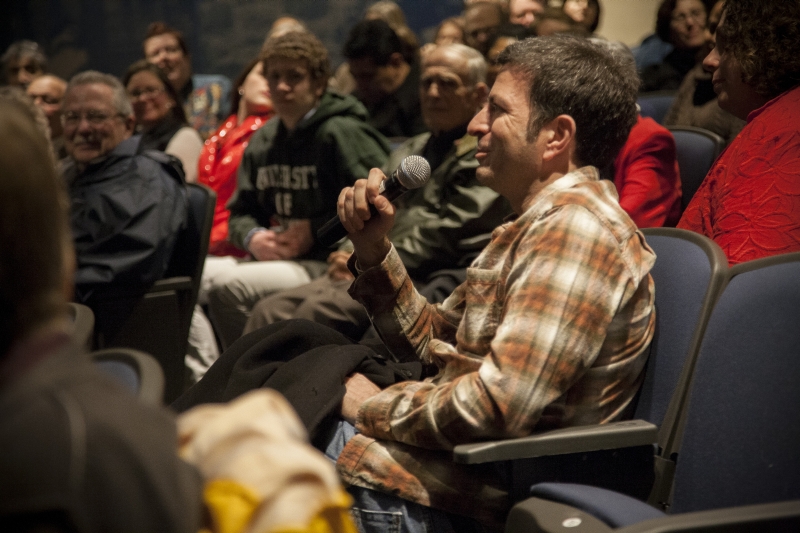 ROUGH CUT SCREENINGS OF DOCUMENTARIES
This is our longest-running program and is the reason we are called Docs In Progress. This program gives filmmakers an opportunity to get some fresh eyes and perspective on their works-in-progress by screening of a rough cut, followed by a moderated workshop-style feedback session with a smart and articulate audience of both filmmakers and those interested in the topics of the film.

Our regular rough cut screening program takes place every other month. We welcome submissions from documentary filmmakers based anywhere in the United States. If selected, travel to the Washington DC area would be your own responsibility. Please read additional guidelines below before submitting.

DOCUMENTARY ROUNDTABLE: TRAILER NIGHT
If you want feedback on a trailer or sample (up to 10 minutes in length), you can submit your film for the Documentary Roundtable, a program for filmmakers held at Docs In Progress in Silver Spring. This program is only open to filmmakers based in Maryland, Washington DC, or Northern Virginia.

Monday, May 11
*Deadline to Submit Your Trailer For Consideration is Friday, April 17
Submit Now

SCREENING SERIES
Docs In Progress presents regular documentary screenings at our Docs in Progress Screening Room. These include finished films by alumni of our programs and other completed films submitted by local filmmakers. We accept submissions on a rolling basis. If you are interested in having us consider your film for inclusion in this screening series for 2020, please submit here.

What kind of films are eligible to submit?

Docs In Progress only considers submissions of unfinished independent documentaries for both our Work-in-Progress Screening and Documentary Roundtable.

Although we define “documentary” rather broadly and may screen documentaries with dramatized, animated, political, or advocacy elements, we do not screen pure fiction films, mockumentaries, music videos, industrials, or works that are purely promotional in nature. We have screened everything from student works to films by well-established filmmakers.

We strongly recommend that, if you are considering submitting your film for a Rough Cut Screening or a Documentary Roundtable Trailer Night that you attend a prior session so you can have a good sense of how feedback is given and discussed.

What is the difference between the Rough Cut Screening and the Documentary Roundtable Trailer Night?

The Rough Cut screening is our longest-running program. For this program, your documentary must be at the rough cut stage (i.e., further along than an assembly but not yet at picture lock). We accept both features and shorts, but not trailers. Because of time limitations, we cannot accept films which are longer than 90 minutes in length.  These screenings are open to both filmmakers and non-filmmakers to attend. The average audience size is between 20-40 people. Submitting filmmakers can be based anywhere in the United States, but must commit the time and expense to traveling in person to the screening if accepted since the feedback is the key part of this program. We generally try to show one feature and one short, or two shorts at each Work-in-Progress Screening.

The Documentary Roundtable Trailer Night is a space to get feedback on a documentary trailer or a single sequence (less than 10 minutes) of a longer film. This program is held at Docs In Progress in downtown Silver Spring, Maryland. This program is open to filmmakers and film professionals only. The average audience size is 15-20 people. Submitting filmmakers must be based in the Baltimore-Washington DC Metro area. We generally show anywhere from one to three trailers/scenes at this program.

Must the filmmaker be local?

For the Rough Cut screenings, preference is given to filmmakers in the Washington DC Metropolitan area, but we have also shown works from filmmakers from West Virginia, Pennsylvania, Ohio, Florida, Georgia, Illinois, Colorado, Massachusetts, California, and New York. If selected for a screening, at least one filmmaker must attend in person and is responsible for his/her own travel costs and arrangements. We cannot accept submissions from filmmakers based in other countries since we cannot sponsor visas.

For Docs In The City work-in-progress screenings, filmmakers can be based anywhere in the United States.

Because the Roundtables are organized to foster local networking, filmmakers must be based in Maryland, Washington DC, or Northern Virginia.

How do I know if I’m ready to submit my film for a work-in-progress screening?

If you answered yes to any of these questions, your film is probably a good candidate for a Rough Cut screening. If you have a film at the trailer stage or just have one segment cut, it can be considered for the Documentary Roundtable.

If your film is past picture lock, please do not submit it for a Work-in-Progress screening.

Is there a fee to submit?

At this time, there is no fee to submit a film to our Rough Cut Screenings or Roundtable.

What are the deadlines to submit? See above for our upcoming deadlines for submission.

Note that the deadline date is to receive both your online submission form AND your film for review.

What if I can't make a deadline but still want feedback from Docs In Progress?

If you prefer to get private feedback on a work-in-progress or need feedback on a timeline which works better for you than our public programs, we also offer fee-based consultations and focus groups. Find out more.

What media formats do you accept?
The preview copy of a film must be available on a streaming service like YouTube or Vimeo. We no longer accept DVDs since sometimes our reviewers are looking at films remotely. We CANNOT accept film submissions which involve any downloading of content on our part. If you are submitting a film on a password-protected link, make sure that the password remains in effect for at least two months after the deadline for submission. If we cannot access your film, it will be automatically removed from consideration. If a film is selected for screening, the screening copy must be available as a DVD or a Quicktime file which will need to be sent at least one week ahead of the screening. You are responsible for outputting the film into this format.

Will a Rough Cut screening interfere with my premiere?

Generally no. While our Rough Cut screenings are public programs, they are publicized as Work-in-Progress screenings, not screenings of finished films. Many of our alumni have gone on to screen their films without any problems in festivals and broadcast. However, if you are truly concerned about submitting a film for a public screening, you may prefer to get feedback through our Focus Group or Consultation services. Find out more.

If you are not seeing the red box to submit, try clicking here.