Minnesota-based filmmaker Jan Selby from Quiet Island Films recently visited Docs In Progress while she was in town for the Washington DC premiere of her latest film BEYOND THE DIVIDE. While she was in town, she talked to a group of filmmakers about her real-world experiences with crowdsourcing theatrical distribution through the platforms TUGG and GATHR. 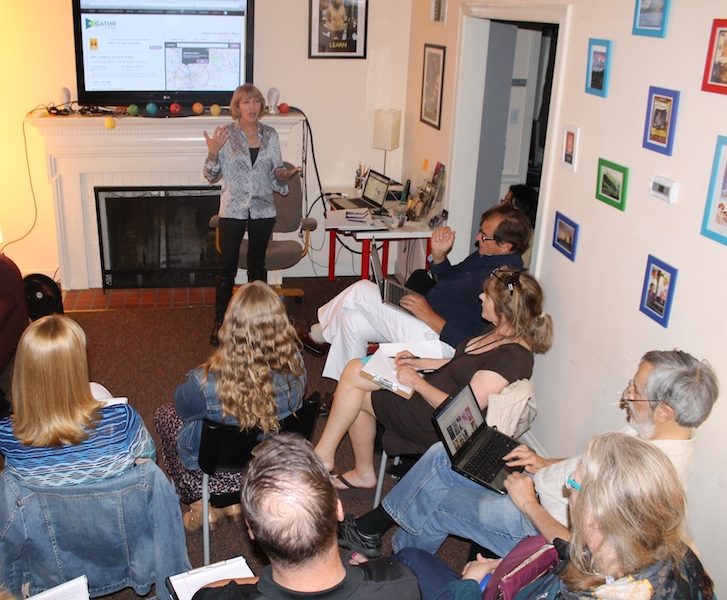 With a background in strategic marketing, Selby applies a holistic strategy to distribution of her films, beginning with film festivals, then exploring other types of distribution including broadcast, educational, and community screenings. She has used both TUGG and GATHR and was eager to evangelize the benefits of these theatrical-on-demand models.

Drawing on the power of the crowd in a similar way to fundraising, many filmmakers are now using online platforms like TUGG and GATHR as key pieces of their distribution strategies. These platforms allow independent filmmakers whose films may not have a theatrical distributor to organize their own national distribution strategy via theaters and community screenings. They can also be useful shortly after a regular theatrical release since most documentaries get released for short windows in only a few cities.

The concept is that these are on-demand screenings so will only take place if enough audience members commit to attending. The screenings can work like a traditional theatrical screening where there is a set ticket price. The platforms have worked out arrangements with independent theaters and some national theater chains like Regal, AMC, and Carmike to allow these on-demand screenings (in exchange for a cut of ticket sales) at times when they can afford to spare a theater (for example, on Monday, Tuesday, or Wednesday nights).

There must be a local organizer (called either a "Promoter" or "Movie Captain") who initiates the request for a screening. This has made these platforms also useful for nonprofits, community groups, schools, or universities. Depending on the venue, you will usually need about 75 other people interested in buying tickets to convert the request into a reality and make the screening happen, so it is of interest to filmmakers that the local organizer be someone connected in the community.

The platforms can also be used for community screenings where perhaps one sponsor or "movie captain" effectively pays a screening fee or purchases a block of tickets and then fills the seats for a free screening. The latter is particularly popular among nonprofit organizations which want to bring films on topics related to their missions. Unlike Tugg, Gathr offers a specific “campus screening” option. This is effectively a fixed-price screening fee for educational institutions.

Selby talked about some of the other key differences between GATHR and TUGG's models. GATHR uses widgets to drive traffic to your own website whereas TUGG's platform sends you to their website and does outreach to people interested in films on different themes (for example, criminal justice or spirituality).

With both, the filmmaker is responsible for providing a DCP (estimate this will cost you approximately $1,000 for a feature-length film), a Blueray, marketing materials, and carrying E&O insurance for the film. If you opt in to showing films at certain theater chains (such as Regal), you also need to agree to a 90-day exclusive (meaning that you cannot sell DVDs simultaneously). Revenue is divided between the theater and filmmaker with the platform also taking a fee and the local promoter also potentially getting 5%.

Lest filmmakers think that theatrical-on-demand is less demanding than other forms of self-distribution, you will still need to have a strategy for marketing the film. Both TUGG and GATHR operate under an acquisitions model and will want to know your marketing strategy. However, they provide another way to make it easier to integrate partnership screenings into your strategy if you partners do not have access to their own screening venues.

Films which have a broad niche appeal have done particularly well. Selby cited the example of AWAKE: The Life of Yogananda which has done particularly well with community screenings in yoga studios, places of worship, and community centers, selling more than 36,000 tickets at more than 40 screenings across the United States. While it is the exception to the rule, it does show the power of the crowd in bringing films they want to see to their communities.