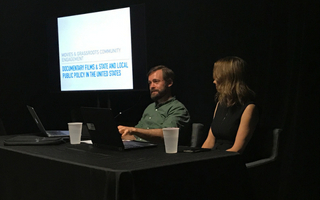 While many social issue filmmakers want their documentaries to make an impact at the national level, because of the decentralized nature of the United States, sometimes films can have the most impact at the state and local level. A recent WIFV/Docs In Progress Documentary Roundtable focused on this topic.

Caty Borum Chattoo and Will Jenkins presented Movies & Grassroots Community Engagement: Documentary Films & State and Local Public Policy in the United States. Their report provides perspectives from 15 policymakers, filmmakers, and advocacy leaders who successfully contributed to policy agendas on the state and local levels, with the help of documentary films. It is the second of a two-volume investigation about the role of documentary films in legislative and regulatory change and influence in the United States. (Volume 1 focused on the federal level.)

It was a treat to be with Borum Chatoo and Jenkins in person. Their passion for filmmaking, pride in its impact to date, and hope for its potential for future change came through many times in our hour together. Here are the report’s strategic recommendations, paraphrased from the report and in some cases expanded upon, followed by some additional tips that came out of the discussion.

Additional key takeaways from the discussion:

MORE ON THE SPEAKERS

Caty Borum Chattoo serves as Executive in Residence and Co-Director of the Center for Media & Social Impact at American University, senior strategy advisor to Participant Media, and board member of Working Films. Her documentary features include Wal-Mart: The High Cost of Low Price and The After Party. She also produced a TV documentary and transmedia series (Stand Up Planet, starring Hasan Minhaj), an environmental justice documentary series, and PSA campaigns on issues ranging from global poverty to climate change to HIV. She was also a longtime collaborator with TV producer Norman Lear. Complete bio at https://www.american.edu/soc/faculty/chattoo.cfm.

Will Jenkins worked for 10+ years in communications and policy at both houses of Congress, the U.S. Department of Health and Human Services, and the White House, where he worked with producers to plan interviews and events with President Obama and senior officials for documentaries airing on PBS/Frontline and Showtime. Working with the Sundance Institute, SXSW, and Tribeca Film Institute, he shared social impact and public policy engagement strategies with media makers, and he developed AFI’s Political Bootcamp for Filmmakers. A producer of videos on social and political issues, he also serves on the board of Working Films.

Kathy Dismukes is the founder of Pintail Productions, a new enterprise focused on creating hella cool content for companies, organizations, and individuals. She is also an impact producer and consultant specializing in fundraising, partnership building, and community outreach for films and nonprofits. A Women in Film & Video member since 2007, she served for two terms on WIFV's board of directors, including as Treasurer and VP of Development.