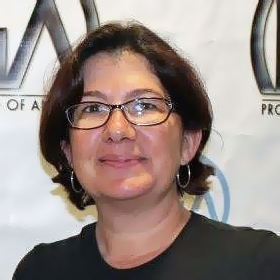 Lynn is an award-winning producer, writer and director whose career creating media spans more than 20 years.  Her work has aired on networks across the globe, including NBC, PBS, Discovery, History Channel, BBC, Channel 4, MTV and Showtime. Her expertise in developing non-fiction programming includes recent series on both Investigation Discovery and OWN. As a member of the Producers Guild of America, she has served as chair for the Documentary Committee and the Women’s Impact Network (WIN). Lynn is the Chair Emeritus of Gandhi Brigade Youth Media, an organization that works with young people from underserved communities, teaching them how to use media to empower, engage and transform.

Fellowship Project: MONEYballot. Gerrymandering is the topic of the day, but few know how our politics came to be so broken. In 2010, an unorthodox approach to baseball and $30M redefined our electoral map — leading to minority rule and the most blatant voter suppression campaign since Jim Crow. MONEYballot explores how a decade later, data that was weaponized has become a primary tool in reversing gerrymanders. The race is on: those who control that data will control state legislatures, and US policy, for decades to come.