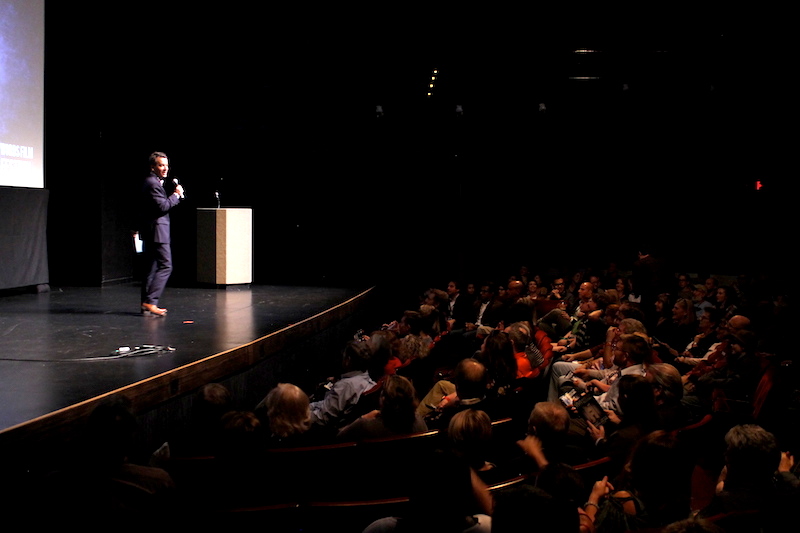 Film festivals and filmmakers are mutually dependent, but often misunderstand each other. What do they each wish the other would do more of?

Back in the Fall, I penned a blog called Combatting the Blame Game When It Comes to Sustainability. As part of that article, I noted that filmmakers spend a lot of time blaming others in the film industry/ecosystem for the lack of career sustainability.

One of the most commonly picked on entities are film festivals. Some filmmakers bemoan the need to pay submission fees, the lack of ability to pay travel, screening fees or cost-share ticket sales with filmmakers. By the time many documentary filmmakers have reached the stage of applying to festivals, they often have few funds left and few resources for funding to support their participation in the festival circuit (even though this is often the primary distribution for shorts and features which may not fit into the strands and preferences of television, theatrical, or Netflix/Amazon distribution).

Film festivals often respond that they provide something most filmmakers would not be able to afford to do on their own -- a ready-made, enthusiastic audience seeing the film on a big screen and a higher profile which can lead to more lucrative outcomes such as distribution or awareness among funders. Most festivals can also argue that they operate on a non-profit model and can have as many challenges as filmmakers in ensuring adequate funding.

I have been on both sides of this relationship -- as a festival programmer/screener/curator and as a filmmaker applying to film festivals. So I understand the challenges for both filmmakers and festivals. While the financial challenges are real, from the discussions I have seen, I sense that the real issues relate to respect for what both filmmakers and festivals bring to the ecosystem. With this in mind, I wanted to offer a few of my own best practices for each.

First, for the festivals...

1. Be upfront about your programming breakdown.
There is an impression (whether warranted or not) among filmmakers that many festivals receive hundreds or even thousands of submissions (and the fees which go with them), but end up programming mostly other films playing the festival circuit or other curated films. I have no problem with festivals doing this; after all, every festival should want to show films they know will draw an audience, so curated selections of likely awards-season contenders, films with particular local interest, or ones which fit into a specialized strand make sense. However, they should also be upfront with prospective submitters about approximately what percentage of their submissions come from blind submissions. That way, filmmakers can weigh whether it is worth it to submit their films.

2. If you invite a film to submit, provide a fee waiver.
If you asked someone out on a date, would you expect them to foot the bill? That is how filmmakers often feel when you express personal interest in their film, but then make them pay a submission fee. I am not talking about the filmmakers who may come up and quickly talk to you after a panel and who you encourage to apply, but rather the ones who you discover at another festival or in research who have films which sound like they could be a good fit for the festival. If you are wooing them to submit, do provide a fee waiver.

3. Watch the submissions.
This goes without saying, but there still is an impression among filmmakers that their films are not getting watched, or not getting watched in their entirety. We know most festivals have their films reviewed, at least at the first tier level, by volunteers. Not every film will be appropriate for your festival. But, unless they do not even qualify for the festival (see Item 2 for filmmakers below), please honor the filmmakers' time and energy making the film by watching it.

4. Be humane with rejections.
It has been fascinating over the past six months to be on the other side of the equation as someone who is submitting to film festivals with Creative Feds, the short I've co-produced with Leon Gerskovic. Because I've tried to follow my own advice below, we've been fairly strategic about the ones to which we've applied. We've gotten into some and not gotten into some. What has surprised me the most is seeing the wide range of how festivals notify us of not being accepted -- from beautiful, personal notes which indicate they watched the film, even enjoyed it, but it simply didn't fit into their programming to festivals which simply change the status on Film Freeway to not selected with no other notification whatsoever. I've also heard from many filmmakers who are never notified at all; the only way they find out is when the festival releases the schedule. Honestly it makes me cringe when I hear this, especially in this age when you can even build in a rejection courtesy note to automate when using Film Freeway or Withoutabox. If filmmakers are taking the time and the money to apply to your festival, the least you can do is turn them down with a note.

5. Know how people watch films is changing, and so should you. A decade ago, the typical trajectory for a documentary film was to premiere at a festival (ideally an A-list festival), then head to other festivals, then get either a theatrical or broadcast run (or both for a chosen few), then release to the educational market, and finally to the general market. The whole process could take a year or two. Those days are over. Now it is not uncommon for an A-list film to play one festival, then premiere on Netflix, then maybe play some other festivals. For films which may not have a chance at an A-list festival, there are a lot of different ways to get films out there, but even smaller festivals are still operating under the assumptions which made sense a decade ago. Nowadays it's all about the hyperlocal, so a film could potentially play in the same market in three different parts of town and attract completely different audiences. Retaining a local or regional premiere may not be as important as it once. People also like to watch things online, but that doesn't mean they wouldn't go see a film they can already see online in a festival setting. In an on-demand, online world, what festivals offer is the experience so many are craving these days -- a big screen, the energy of the crowd, the added plus of getting to meet the filmmaker(s), ask questions, and hear insights. Don't be afraid to break your own submission rules so that you can expand the number of exciting film experiences you could potentially give your audiences.

Now, for the filmmakers...

1. Know your festival strategy.
Why are you submitting to festivals? Is it to get your film out to more audiences? Is it to land a distributor? Is it to attend some cool parties? Be honest with yourself in knowing what it is you hope to get out of the festival experience and where it fits in your overall plans to market and distribute your film. And always remember there are many ways to get your film out into the world and festivals are only one way.

2. Know your festival.
It amazes me how many filmmakers don't seem to do any research when it comes to festivals. Case in point: I run a small community film festival which is very very specific - we only accept documentary shorts about people, places, and happenings in the Washington DC Metropolitan area. You'd be surprised how many submissions we get of fiction films, feature documentaries, and documentaries about international topics. It is a waste of your time and money to apply to festivals which don't program films like yours. And don't just research from the submission page. Actually go to the festival's website and see what they have programmed in recent years. For example, a festival may say they take documentaries, but you can see from their programs that the ones they take are all celebrity-driven, and the bulk of the films they show are fiction films. Maybe if you have a social issue documentary, that might not be the festival for you. Do your homework.

3. Know that festivals cost money.
If festivals are part of your strategy, they need to be part of your budget. The budget should include submission fees, expenses associated with getting a screening copy to the festival (make sure you know if they require a DCP which can be costly), printing and sending postcards and posters to promote the film at the festival, and travel if the festival does not cover it and you want to attend (and think about travel not only for the filmmakers but also for the people in the film). For A-list market-based festivals (the Sundances of the world), you may also need to hire a sales agent or a publicist. And, while it never hurts to ask for a submission fee waiver, know that the argument of being a poor filmmaker is about equivalent to a sad violins emoji. Instead focus on why the film would be an especially good fit for the festival or include where it has played previously.

4. Festival review does not equal feedback.
One thing I've heard from many filmmakers is how they wish, if a festival turned them down, they would at least send some feedback on their film. While there are a few festivals which do this, I find the practice odd. When festivals are reviewing films, they are doing so to see if the film would be a good fit for their festival. Great films get turned down all the time for reasons which have nothing to do with the quality of the film. If it is a well-liked film, one would hope you might get a nice note from the head programmer and there is a good chance they will let other festival programmers know about it. However, don't expect them to give you feedback on how your film could be improved. The folks reviewing your film are also likely reviewing dozens if not hundreds of other films, so, while they should be watching them in full, the comments they are providing are really quick observations and notations about the fit for the festival. If you want thoughtful feedback on a film, you are best off holding a focus group or applying for a work-in-progress screening program well before you lock picture.

5. While it's OK to use festival deadlines as a milepost for completing your film, don't rush it. Yes, I know you have big plans to be done with your film by August so you can make that Sundance deadline. Guess what?  This is the same strategy that thousands of other filmmakers have. You can only imagine how many films top festivals receive in the final week before their late deadlines. Not only have you paid primo submission fees, but now your film is lumped in with a pile of others at a time when festival programming staff have already sifted through submissions for months. Remember that the programmers have seen it all by this point and have little patience to watch films that are almost-done. Most A-List festivals also won't let you reapply so now you may have squandered an opportunity in a rush to make a deadline. Once you are really sure your film is ready (ideally after considering feedback from a focus group, work-in-progress screening, or trusted colleagues), then apply. If you miss the Sundance deadline, remember that there are deadlines for great festivals all year long.