Combatting the Blame Game When It Comes to Sustainability 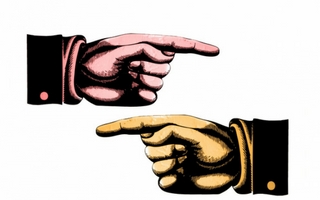 Career sustainability in documentary is hard. But it is easy to point the blame at someone else.

I've been thinking a lot about sustainability recently. Many of you have probably seen the recent State of the Field report which came out from the National Endowment for the Arts (NEA) and the International Documentary Association (IDA) after a Documentary Sustainability Summit earlier this year. I was at that Summit and also at IDA's 2016 Getting Real Conference which was, in many ways, the launching pad for a new discussion of sustainability for documentary filmmakers.

The report notes some of the challenges facing both emerging and established documentary filmmakers (if you need a reminder, just look at the case study it includes of the festival darling Brooklyn Castle). It points to some places where the documentary film community is making headway, but also does not pretend to be the final word on solutions. In various parts of the country and even online in places like The D-Word, filmmakers and other industry folks have been meeting up formally and informally to discuss sustainability. Here in Washington DC, Jax Deluca from the NEA will be coming to an upcoming WIFV/Docs In Progress Documentary Roundtable to discuss the report and hear more from our community about how DC-area documentary-makers are making a living (or not) from their documentary work.

The challenge of these conversations is to make them truly constructive and not just venting sessions. One thing I have noticed, having sat in on various meetings and seeing the discussion generated online is that it is far too easy to point fingers at another part of the documentary world as the culprit in the financial challenges of documentary filmmaking.

Do you recognize any of these sentiments?

"Newer filmmakers are willing to work for peanuts, bringing down the rates for everyone!"

"Old school filmmakers have gotten so used to ridiculously high budgets that they are making it impossible for funders to spread the love around to level the playing field."

"I've been a documentary filmmaker for more than 30 years. I used to be able to make a modest living, but not anymore. I'm thinking of leaving the business."

"It feels like the same clique of established filmmakers are getting all the money, festival play, and broadcast love. How do I even break in?"

"Film festivals are making money off the backs of filmmakers!"

"Why do foundations only want to fund films which have social impact?"

"Why don't foundations who want support films for social impact fund outreach so the film can actually make an impact?

"Why does everyone I meet want me to give them access to my film for free? Why will they only watch it on Netflix or Amazon?"

"It seems like everyone expects me to do work for them for the experience and the exposure? I'm passionate about documentary filmmaking, but 'exposure' can't pay my rent."

"There are far too many filmmakers entering the market. We have to stop encouraging them."

I've heard all of these comments over the past year from different people in different parts of the documentary field. These may feel like innocent vents, but they all have something in common. They all place blame for why documentary filmmaking is so financially challenging on some other party in the documentary filmmaking ecosystem. Who is responsible for the sorry state of affairs for filmmakers? Take your pick: Funders. Festivals. Distributors. Audience members. Other filmmakers (not any of us, of course, but definitely others who have two much/little entitlement/experience/willingness to compromise.

Even the organizations whose missions are to serve filmmakers have been taken to task. Why Nonprofits Should Stop Supporting Film Production? was the provocative title of a recent article in IndieWire from Brian Newman. While the title was meant to be provocative more than prescriptive, when I dug into the article, I found a deeply problematic argument: Nonprofits focused on developing filmmakers have not evolved with the times; funding focus should shift to more pressing needs around exhibition and distribution. Newman writes, “an enormous amount of nonprofit money goes towards putting on artist development projects that can be better accomplished online, or that are obsolete in today’s marketplace.” Newman’s argument rests on a scenario which pits two pillars of the filmmaking ecosystem in a funding battle against each other – artist development and audience development.

Full disclosure: I happen to run a film nonprofit (Docs In Progress). We design our programs based on the needs we hear from our community. We offer more than 50 programs every year which include educational and professional development, artist services, and work-in-progress feedback screenings. Even though our primary mission is to develop filmmakers, our constituents have always been filmmakers and film lovers. In our eyes, in order for a healthy, vibrant film community to exist, one cannot exist without the other. Documentary is the art form and vehicle. The end game is always stronger community.

Very few of us working in the nonprofit space are dealing with enormous amounts of money. Our challenges are not unlike those of the filmmakers we serve – we hustle for every penny of grant money and donations, and operate as leanly as we can. As more full disclosures, my annual salary is about half of the median income for the Washington DC Metropolitan area. Not until I went into the world of founding and running a film nonprofit did I ever have credit card debt, pay more than 15% of my take home pay for health insurance, or ever get low balance warnings for my bank account. I left a comfortable 9 to 5 job to take on a job which often had me working longer hours for about half the pay.

But I love what I do.

And that is part of the problem for filmmakers too. Our passion is for the craft, for the stories we tell, and possibly even for a larger impact made by bringing to light these stories. But that passion also allows us to accept the harsh realities of our field. It is often expected that a filmmaker will magically find a way to get their project to a rough or fine cut stage before a funder will take them seriously. As a result, filmmakers often have to cut corners, proving the old adage: Fast. Cheap. Good. Pick two. By the time most first-time filmmakers get the film finished, they have little funding, energy, or know-how to get their film out into the marketplace. Behind all the smoke and mirrors, the audience has little understanding of what it takes, especially in a world where we are all so overwhelmed by content. At a recent self-organized screening of a completed documentary where the filmmaker in the Q&A admitted how difficult distribution was, the audience clamored to be helpful, but the solutions were of the "Why not get this in front of Oprah?" variety.

We live in a time when we have convinced ourselves that filmmaking is more accessible than ever. No longer do most film nonprofits need to serve the same primary role they did in the 1970s – as collectives where filmmakers could get access to expensive and bulky film equipment. In theory, we could all make films for the cost of a Smart Phone and a few apps. I wish this were true, but filmmaking is still just as inaccessible to many as it has always been. The downside of democratization of the field has meant that more films than ever are competing for an ever-dwindling amount of funding, support, and distribution. Without the support of film organizations at the critical and painful stages, many filmmakers – particularly emerging filmmakers and those from traditionally marginalized communities — would give up altogether. The professional development, labs, feedback, seed funding, and face-to-face community provided by film nonprofits help indie filmmakers strengthen their work and themselves for the long haul.

Every day, I witness firsthand the small-but-mighty impact of a physical space where emerging filmmakers interact with seasoned filmmakers and industry representatives, get and give feedback to each other on their works-in-progress, and feel solidarity in a career journey which is full of constant hurdles. I know similar impact transpires at film nonprofits across the country – from Firelight Media and Kartemquin’s labs specifically focus on developing filmmakers of color to Southern Documentary Fund’s taking the Good Pitch model to the local level to the incredible work of Appalshop, BAVC, Scribe Media, Uniondocs, Working Films, Points North Institute, and right here in the DC area Women in Film and Video, TIVA, and Creative Edge Collaborative.

The harsh reality is that no part of the film nonprofit world is flush with cash and every part of our field needs more funding right now. Ironically, the President’s budget has proposed eliminating one of the few funding institutions committed to supporting both artist development and exhibition equally – the National Endowment for the Arts. Now, more than ever, filmmakers and film organizations need to work together to protect and build upon the precious resources we already have, rather than viewing each other as competition in a losing game. The more we jostle amongst our peers for a perceived fixed or dwindling amount of resources or play the blame game in the financial challenges facing our industry — the more everyone loses. It is time to work together and use this moment to spend our energy defending the resources we have, building a stronger film community, and learning how to advocate better so we can lift the entire field up rather than split it apart at the seams.

Erica Ginsberg is the Co-Founder and Executive Director of Docs In Progress, a nonprofit based in the Washington DC area, and is one of six co-hosts of the international online documentary community, The D-Word.