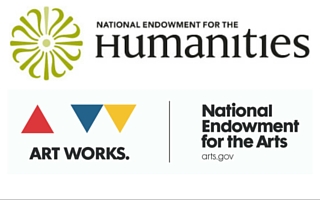 The National Endowment for the Arts (NEA) and the National Endowment for the Humanities (NEH) are major federal sources of funding for documentary films. As a result, getting funded is quite competitive. Program officers from both agencies recently participated in the WIFV/Docs In Progress Documentary Roundtable to help demystify what kinds of documentary projects are appropriate for their funds and share more on the process of requesting funds.

by Matthew Radcliff
Co-Organizer, WIFV/Docs In Progress Documentary Roundtable
May 4, 2015

To give a little background, both the NEA and the NEH are celebrating their 50th anniversaries this year. Both were created in 1965 as independent federal agencies. The National Endowment for the Arts provides “funding and support [which] gives Americans the opportunity to participate in the arts, exercise their imaginations, and develop their creative capacities.” They fund many different artistic fields; you can see the full list at the NEA website (http://arts.gov/). Filmmaking in the broad sense falls under the “media arts” category; this includes film, TV, radio, Internet, interactive & mobile technologies, video games, and much more. (http://arts.gov/grants-organizations/art-works/media-arts)

The National Endowment for the Humanities “serves and strengthens our republic by promoting excellence in the humanities and conveying the lessons of history to all Americans.” (http://www.neh.gov/) The films that the NEH funds are mostly historical in subject and involve a lot of scholarship in the planning and in the presentation. A key element of their funding strategy is projects that communicate to the public the current scholarship in the humanities. (http://www.neh.gov/grants/public/media-projects-development-grants)

Our first speaker was Sarah Metz, the Media Arts Specialist at the NEA. She started by noting that the NEA does not give grants to individual artists (this is not uncommon for any grant-giving organization). They will give grants to 501c3 non-profit organizations, state & local governments, and federally recognized tribal communities.

One thing which differentiates the NEA from other funders (including NEH) is that do not give grants to artists through fiscal sponsors – but they will give grants to organizations that are “partnering” with an artist. While the NEA is trying to avoid having funds just “pass through” a fiscal sponsor, they love to see when an organization actively partners with a filmmaker (as a producer or outreach coordinator, for example) to create a better project. Some examples given were a nonprofit providing expertise on the topic of the film, or a local government providing distribution and outreach opportunities (e.g., screenings, workshops, etc.) for the finished piece of art, or a university applying on behalf of a professor and letting the professor use their resources (such as camera or editing equipment) to make the film.

NEA also requires a 100% match of funding. So whatever amount you ask from the NEA, you need to bring that same amount from other sources. You don’t need to have those funds already in hand, but you need to at least have plans to acquire or apply for them. And they can’t come from another government source, such as the NEH.

If you meet this criteria, the name of the NEA program a filmmaker would apply for is “Art Works” (http://arts.gov/grants-organizations/art-works/grant-program-description). They accept applications twice a year (August and January), but for different types of projects each time. The particulars for each application period are listed at the Media Arts website linked above, but in very general terms they break down into creating art (e.g., producing a film) versus engaging with art (e.g., a film festival). In both cases the application process has two steps. First, submit a letter of intent about the project. Second, two weeks later, submit the full application. All applications must be submitted online, and you need to be registered in the “grants.gov” database.

Fundamentally, the main question a reviewer will want the application to answer is “why now?” Because there are so many applications, the projects that most need to happen will get funded. So make sure that your proposal addresses that question.

The NEA has funded film festivals and also organizations that support documentary filmmakers [editor's note: including Docs In Progress]. They have also funded individual documentaries. One recent local, production was JAMES MCNEILL WHISTLER & THE CASE FOR BEAUTY by Karen Thomas (which premiered on PBS September 2014) Another example is  BORN TO FLY, about choreographer and “action architect” Elizabeth Streb. The movie will screen on PBS' Independent Lens on May 11 (at 11pm on WETA).

Our second set of speakers was a tag-team from the National Endowment for the Humanities (NEH), Karen Kenton and David Weinstein. Both of them are Senior Program Officers in the Division of Public Programs, the home for Media Projects, which is how the NEH refers to film, TV, and radio projects.

What sets NEH-funded apart is that they should be centered around a “core set of humanities ideas developed by scholars, matched to imaginative formats that bring those ideas to life” for the general public.

As part of this scholarship-based approach, all projects need to have an advisory team of academic scholars. The team could also include advisors who are not academic scholars, but have significant “life experience” with the topic. But the core of the project needs significant input from scholars. The proposal will get reviewed by a group of people who will evaluate the amount and quality of the “scholarship” component, so…fair warning.

There are four different programs through which the NEH gives funding for media projects. The first is funding for development of media projects, either film, TV, or radio. They may be single programs or a series. Projects may be on U.S. or international topics. These development funds are typically for the purpose of writing a script, and also for developing a detailed plan for outreach and public engagement in collaboration with partner organization(s). As part of the submission, you will need a detailed treatment, and have a team of scholars in place to advise the project. Awards are in the range of $40,000 to $75,000.

The second funding program is for production and distribution of film, TV, and radio programs. Again, projects can be U.S. or international topics. You need to provide a script for films and TV programs; radio programs require a detailed treatment. You will also need to include information about the team that will be creating the media (along with the advisory team). As much as the advising scholars need to be “top-notch,” the media team is also expected to be experienced and capable of producing high-quality programs. David and Karen both suggested that newer producers partner with more experienced filmmakers to submit the proposal.

A few of the films that have been funded recently include DOROTHEA LANGE: GRAB A HUNK OF LIGHTNING, which premiered on PBS last August, and THE LOVING STORY, about the couple whose 1958 marriage led to the Supreme Court overturning Virginia’s anti-miscegnation laws. The film played at many film festivals and premiered on HBO.

The third program is called “Bridging Cultures through Film,” and specifically addresses international topics. The intent is to encourage audiences to think beyond the U.S. borders. They have the same split of funding between development and production.

The fourth program is for what they call “Digital Projects for the Public”. These can be a component of a film or TV program, such as a website, and also include mobile apps or tours, interactive kiosks, games, virtual environments, and more. There are three levels of funding:

Prototyping grants, for proof-of-concept development work (up to $100,000)

Production grants, for end-stage production and distribution (up to $400,000)

Successful applications demonstrate that the topic is an important subject. They also have very strong scholarship at the core, including a team of advisors. The reviewers like to see evidence that there is a back-and-forth between the scholars and the creative team, and they also prefer that the advisory team includes different perspectives covering different areas of research. This is to help ensure that the topic is covered “analytically and interpretively through an appropriate variety of perspectives.” In addition, there needs to be an accomplished creative team. Suggestions were to partner with an established filmmaker and to brag a little bit in the proposal.

Along with producing a great program, the outreach plans are becoming more and more important. Don’t overlook this part of the proposal. Lastly, make sure that the proposal looks like an NEH proposal. There are sample proposals available on the website for you to look at, and both program officers said they might be able to share additional proposals that closely match your particular topic or program. Don’t hesitate to give them a call.

All of the speakers were more than willing to help filmmakers with their proposals (given enough time before the deadline, that is). They were emphatic that the best way to get information is to talk on the phone. These applications are complex and it can be difficult to discuss the issues over email. If you give them enough notice, they are even willing to read over and give feedback on your proposal before you submit it – and that is a great way to improve your chances.

Final advice from the speakers: Call them! They want filmmakers to submit strong applications, and they are happy to help them improve.