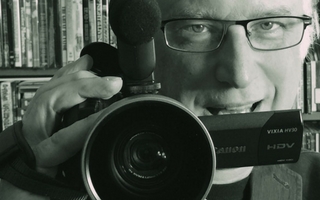 Our 2015 Filmmaker-in-Residence Jeff Krulik has a career which has taken him from the heyday of public access television to indie cult status as a documentarian honored by MoMA and the Flaherty Film Seminar. During his residency, Krulik has been focusing on media management for his extensive collection of footage and ephemera, in preparation for creating a film archives of his work. It hasn't been easy for this self-described hoarder.

As early as I can remember, I've always been a collector. Something in my DNA must have cemented this path early on: my family never threw anything out, and my father's stamp collecting morphed into becoming an ephemera dealer of all things paper, which is still in business (S.H.Jemik).

I never knew an uncluttered world. But what was once a source of comfort and security, has become a bit of a curse, when you add a 30-plus year body of filmmaking and video production. Imagine a storage unit filled with tapes of all stripes, and source material and press clippings (all saved in triplicate or beyond, because I was not blessed with a cut-off switch). Sound familiar to any of you out there? Is this isn't you, it's someone you know, or someone you've seen on a reality TV show.

Maybe I'm exaggerating, but this scenario helped frame my Filmmaker-in-Residence application--the struggle over media management, how to merge my analog universe with today's digital one, and develop a game plan for repurposing content, cataloging and archiving--or even throwing out--the rest.

So what am I doing in the office space? I've schlepped in every analog machine I have access to (save my 16mm movie projector) and I have a tape converting setup, that goes from deck to deck to computer and hard drive. I'm basically seeing what's on these tapes, and dubbing when appropriate. In some cases, I'm repurposing the material, such as my TV documentary on circus sideshows and human oddities, I'm intent on creating an online channel for all the many outtakes and unused material. This is not unlike what I've already done for my Ernest Borgnine road trip. I view these as DVD extras without the expense of making a DVD (that likely wouldn't sell because that format is becoming obsolete too).

I'm also working with the University of Maryland to accept my 'archive' into the Special Collections in Mass Media and Culture. As an alum of the school, I feel there's no more appropriate place for what I've always envisioned as a 'collection.' The support and interest is there, as it remains in negotiation, and it'll hopefully be official in tandem with a campus exhibit celebrating the 30th anniversary of Heavy Metal Parking Lot next May.

As a side note, that's the documentary of mine that has had the widest exposure. It was two hours spent in a rock concert parking lot in 1986 (our nearby Capital Centre, torn down in 2002), interviewing heavy metal fans before Judas Priest performed (and co-produced with John Heyn). I've spent the 30 years since then working on many documentaries, but those two hours in that parking lot are what I'm most known for. I'm not complaining, believe me. I'm grateful for any shred of interest, at any time, in anything I've done.

But along with the Heavy Metal Parking Lot trove (including a postcard from John Waters saying the film 'gave me the creeps.'), there's an enormous swath of boxes, books, tapes and ephemera. Will UofMD take it all? I've already been informed that they will only take two copies of a magazine, newspaper or article. Will I recycle or throw out the remaining fifty copies of my cover story in the Washington City Paper? God help me if I can't. But at least I'm on some path to progress. I made a start. And that was what was most needed.

My storage facility will be sad to see me go. Well, not me personally, but my monthly bill. And yet, I'm sure there'll be another poor "collector/hoarder" lined up to take my place.

On another side note, I want to thank those of you who were at my retrospective presentation and talk at the Takoma Park community center in May. If you were there, I hope you enjoyed the unexpected journey I went on, as I tried to make sense of the path from public access to indie-DIY filmmaker, with stops at Discovery Channel and Maryland Public Television along the way. In my view, the evening morphed into group therapy, career counseling and 'this is your life' all rolled up into one, and I wish it had been taped.

But if it had been taped, it would just wind up taking up space on my shelves--or hard drive--and I need to stop thinking like that if I'm going to keep moving forward.

Thanks and see you in Documentaryland.

Jeff Krulik was selected as Docs In Progress inaugural Filmmaker-in-Residence by a review panel from 21 applications submitted from accomplished filmmakers from all around the world. Based in the Washington DC area, Krulik has 30 years of experience spanning the revolution in video technology. He has shot and directed documentaries which explore the fringes of popular culture (Heavy Metal Parking Lot, Ernest Borgine on the Bus, and Led Zeppelin Played Here, among others). During his residency, Krulik has focused on media management for his extensive collection of video footage, including completed projects, source tapes, incomplete projects, and outtakes in preparation for creating an online portal of material and developing a film archives of his work.