Review: The Wolfpack and Cinephilia

Is THE WOLFPACK part of an ethnographic documentary tradition that seeks to display the “strange” for spectator enjoyment? Or does it consistently work against this tradition of depicting its main subjects as human caricatures? Joshua Glick reflects on the film as part of his series of reviews of classic and contemporary documentaries. 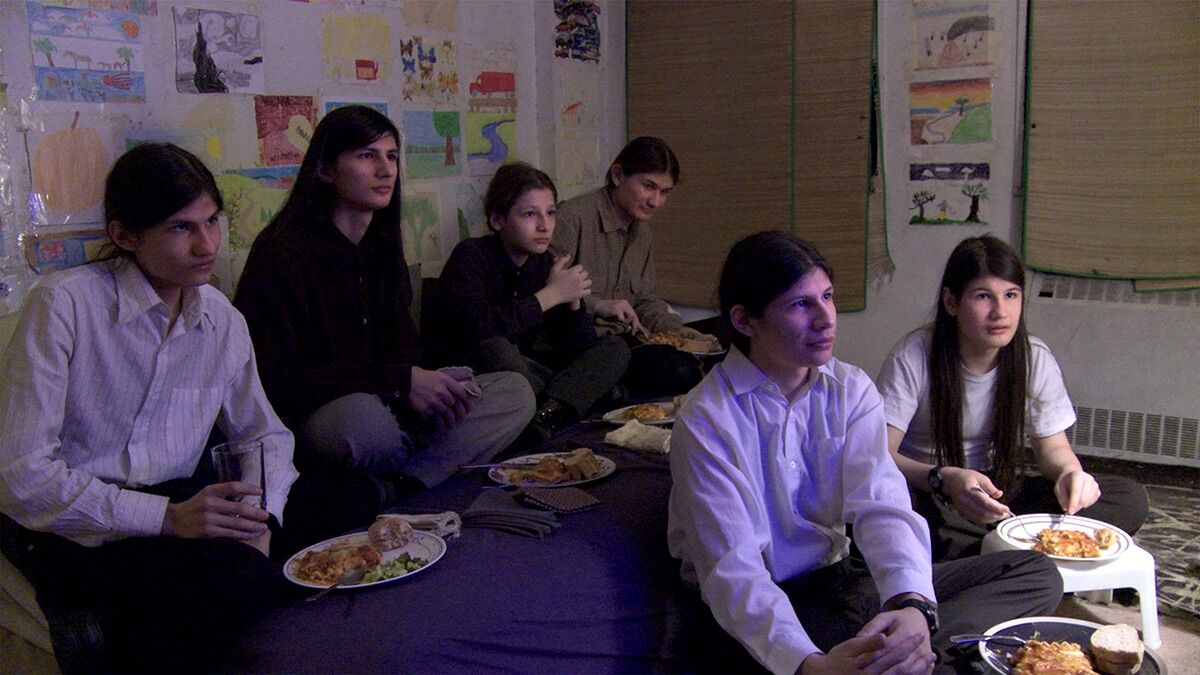 Since its January 2015 premiere at the Sundance Film Festival, The Wolfpack has received glowing praise from critics and film aficionados. Director Crystal Moselle’s documentary about six brothers growing up in isolation in a public housing complex on the Lower East Side of Manhattan won the Grand Jury Prize when it played in Park City. It has been enjoying the attention of enthusiastic reviewers following its release in mainstream commercial theaters. Even some of Hollywood’s most vocal personalities felt compelled to share their admiration for the film, Jonah Hill tweeting that The Wolfpack was one of his “favorite movie[s] of the year…”

It makes sense that The Wolfpack is a darling of the festival circuit and a popular draw among hip audiences and the news and entertainment press. Reality TV has become the default programming format for television, and all variety of documentaries appear on our regular menu of Netflix and Hulu options. Watching documentaries, then, is part of peoples’ regular diet of ritualized media consumption. The Wolfpack satisfies people’s love for a nonfiction “New York Story,” while it also stands out for its striking and troubling subject matter.

Mark Angulo and his wife Susanne, paranoid about what they believed to be the corrupting threats of the big city, sought to keep their sons Krsna, Jagadisa, Bhagavan, Mukunda, Narayana, and Govinda perpetually indoors. Home schooled and forced to abide by their father’s domineering vision of their apartment as an autonomous social space, the brothers grew up looking to movies as a means of imaginative escape and a way to cope with the physical barriers around them.

The brothers did not just watch movies but meticulously re-staged the stories they viewed on the small television screen in their apartment. We see examples of their in-house theatrics for films such as Reservoir Dogs (1992), Pulp Fiction (1994), and The Dark Knight (2008).

Moselle could have taken the film’s subject and pursued an investigative piece about the damaged victims of an insolated upbringing. With voice-over, outside interviews, and further probing into the kind of constrained socialization the Brothers Angulo endured, the documentary could have been the stuff of activist docu-journalism, aiming to expose what goes on “behind closed doors” of a seemingly familiar Manhattan neighborhood.

The Wolfpack, however, is a different kind of film. Moselle kept the lens focused on the brothers and a lot of the time, they come across as articulate, strong-willed, and reflective. They talk about their frustrations with their parents’ views of their urban environs, how movies gave them a sense of agency, and the affection they feel for each other. Interleaved between these moments are flashes of home movies of the brothers acting out scenes from films as well as playing songs as if in a music video. The Wolfpack ultimately charts an uplifting story, showing the brothers becoming more confident and independent as they leave their apartment and venture out into places like Coney Island in search of new experiences. We even see Govinda move into his own apartment and Mukunda begin work as a production assistant.

Still, the film at times veers towards the portrayal of the urban gothic. Canted camera angles, oblique perspectives, and an eerie score make the brothers seem odd and exotic. The trailer for the film primes viewers to look at the Angulos in this way. And much of the home movie footage goes uncontextualized, appearing for fleeting moments to shock viewers and to show the group as bizarre rather than to add depth to an understanding of the brothers’ familial history.

One could certainly debate the ethics and aesthetics of how Moselle courts viewer attention and empathy. Is The Wolfpack part of an ethnographic documentary tradition that seeks to display the “strange” for spectator enjoyment? Or does The Wolfpack consistently work against this tradition of depicting the brothers as human caricatures? If Moselle had inserted herself into the story, making her own investments and interests known to viewers, would that have helped collapse the distance between “us” and “them” or would that have gotten in the way of the Angulos sharing their own story? 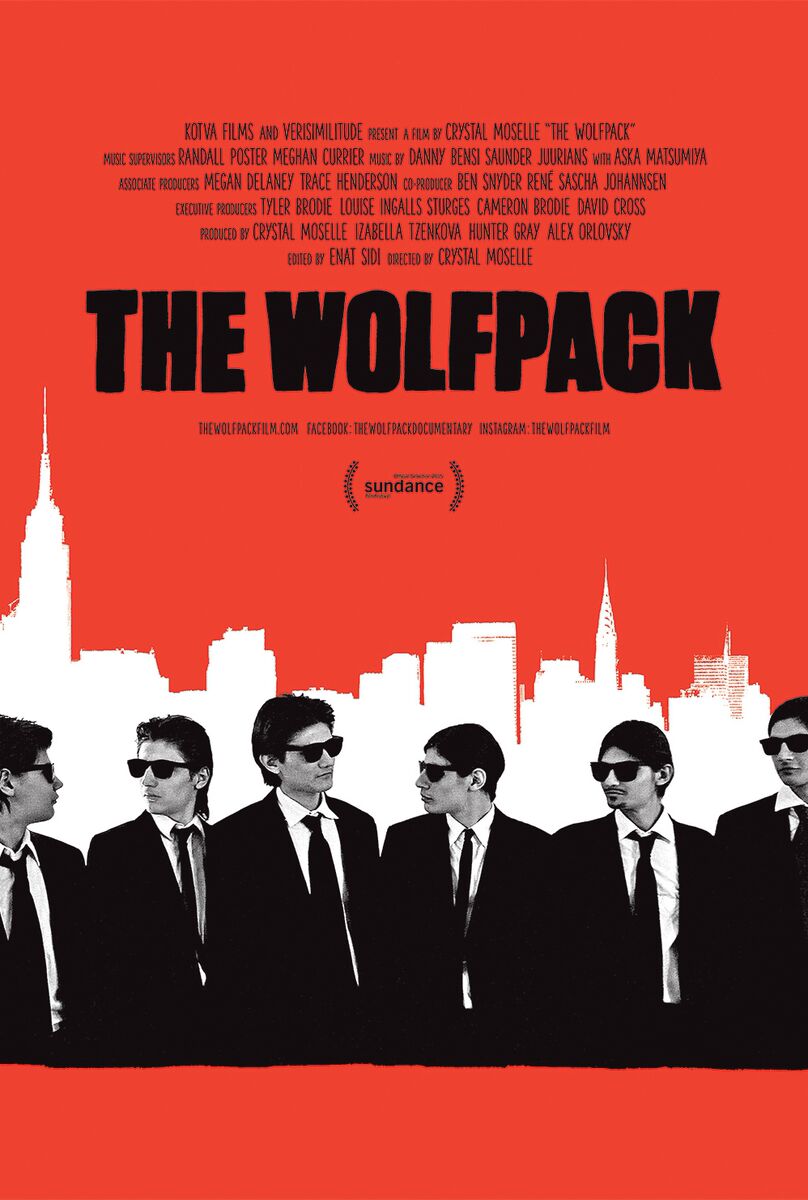 Watching and re-watching The Wolfpack has placed these tensions in sharper relief. I have also found myself growing increasingly interested in the Angulo family’s own form of cinephilia. It appears to be more complex than Moselle lets on, as well as more complex than the subsequent documentaries showing Angulo brothers happily touring in Hollywood, excited for the prospects of becoming show business professionals. The attraction to cinema that we see in The Wolfpack is definitely different from accounts of a young, sickly Martin Scorsese imagining cinematic scenes as he gazed out of his apartment in Little Italy onto the bustling streets below; George Lucas feeding his omnivorous appetite for Classical Hollywood, high art, and fantasy television while growing up Modesto, CA and attending film school at USC; and Quentin Tarantino, whose education as a video clerk in Manhattan Beach in Los Angeles allowed him to later combine tropes from Japanese samurai films and Blaxploitation features in the same movie.

I was curious about the breadth of films the Angulo brothers absorbed. What we are primarily privy to is their fondness for the high-octane, fast-talking, action-packed films from the 1970s and 1990s. To be sure, these films have practical appeal, as the brothers could recreate the films’ homosocial environments in their apartment. Acting out their kind of theatricalized violence could be also interpreted as a way they worked through what could otherwise not be expressed within the physical confines of the apartment and the familial structure created by their father.

But there were moments when then brothers conveyed a love for other kinds of films – for silent cinema and studio masterpieces. What did the brothers admire about Citizen Kane, a film very much about the investigative power of cinema to see and comprehend the world and peoples’ conflicted motivations.

The Wolfpack might also have explored the contradiction between the dual fantasies that consumed the parents. The father is perhaps the overlooked cinephile in the film. He speaks of New York City as though the city in which he lives is the same that appears in grimy, violence-filled crime dramas and B-action movies. At the same time, a cinematic universe offered by the Hollywood dream factory provides him with solace and a blissful escape from the city.

Allowing audiences to see longer excerpts from the Angulo brothers’ homemade films and discussing them at length might have provided a better sense of their homegrown craft. This was especially true at the film’s conclusion, when Govinda created a personal documentary that consisted of a conveyor belt of emotions, performed by members of the family.

Dressed as primal feelings, each symbolic character moves by way of a dolly as the camera captures a moment of direct confrontation between the emotion and the viewer. It's a fascinating, experimental short documentary, reflective of the Angulo brothers’ upbringing but far different from the Hollywood-style reenactments we see throughout The Wolfpack. It’s a kind of filmed theater where personified emotions assume a series of stances towards the world. The scene, like many other of the most expressive moments in the film, is compelling but appears for all too short a time and goes severely underexamined. As a result, we get only the surface sense of who the brothers are, the struggles they have faced, and their manifold relationship to motion pictures.

The Wolfpack is currently in theatrical and on-demand distribution through Magnolia Pictures.  Find out more.