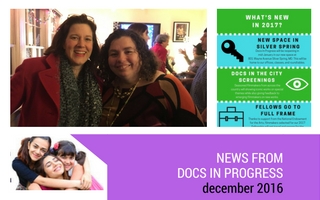 As 2016 comes to a close, Docs In Progress looks back at the year in docs and looks forward to a new year in a new location. Plus funding deadlines, hot reads, and much more...

A Message from the Executive Director

As we head into the closing week of 2016, I look back on a year which brought many changes -- at the international and national level in terms of political surprises, at the cultural level in terms of the many artists who passed away before their times, and within the Docs In Progress sphere as we prepare to head into a new chapter in new space.

This week, our staff will be hard at work, packing up the house for our move next week. Since I am known for having a bit of a cluttered office -- I go by the old adage "creative minds are rarely tidy" -- my colleagues have joked with me that it would take a move to force me finally to clean up my desk. As usual, the procrastinator in me has found many ways to delay the actual pack up of my office, but reality is setting in.

Reality is also setting in that this is the final week of our end-of-year fundraising campaign. Thanks to our generous supporters, we are getting so close to our goal to raise $15,000 before year's end to offset costs associated with the unexpected move. Now it is time for us procrastinators to unite. If it has been on your to-do list to get that donation in to Docs In Progress before the end of 2016, now is the time. As a reminder, please enjoy this little missive from me and many of our friends and colleagues who gathered at the Doc House for the last time just a few weeks ago:

2016 had a lot to remember, some of which we have included in this newsletter. We are also featuring a preview of what is to come in 2017. Hint: There's a lot more than just new digs. Plus the usual upcoming grant deadlines, hot reads, and alumni news. As a new year is just around the corner, may we all come together in 2017 to use the power of our individual and collective voices to live up to our mission: to tell stories through documentary film to educate, inspire, and transform the way people view their world.

NEWS FROM DOCS IN PROGRESS

Our Office Will Have Slower Response Time December 26-January 6
Due to staff attention to our move and conversion of our Internet/Phone service, we will have more limited availability to deal with routine phone calls and e-mails for the next two weeks. Staff WILL be checking messages at least once per day and responding as possible. However, please do bear with the response time since our attention this week needs to be primarily on packing and next week we will likely have some downtime on our phone and Internet service during the move.

Docs In Progress to Receive Second Grant from the National Endowment for the Arts
National Endowment for the Arts Chairman Jane Chu has approved more than $30 million in grants as part of the NEA’s first major funding announcement for federal fiscal year 2017. Included in this announcement is an Art Works grant of $15,000 to Docs In Progress to support Docs In The City, a new curated screening series which will feature presentations of thematic work by a presenting filmmaker followed by a work-in-progress screening on a similar theme by an emerging filmmaker. The Art Works category focuses on the creation of art that meets the highest standards of excellence, public engagement with diverse and excellent art, lifelong learning in the arts, and the strengthening of communities through the arts. “The arts are for all of us, and by supporting organizations such as Docs In Progress, the National Endowment for the Arts is providing more opportunities for the public to engage with the arts,” said NEA Chairman Jane Chu. “Whether in a theater, a town square, a museum, or a hospital, the arts are everywhere and make our lives richer.” This is Docs In Progress' second recent grant from the NEA, having also received support to deepen our artist services programs.

We Are More than 90% Towards our End-of-Year Giving Goal
More than 104 individuals have answered our call for donations to help Docs In Progress navigate expenses associated with our move smoothly, getting us to 90% of our total goal of raising $15,000. The campaign continues through December 31. If we surpass our goal, additional funds will go towards supporting Docs In Progress capacity-building efforts.Donors may make contributions online via Crowdrise, a crowdfunding platform at docsinprogress.org/crowdrise16, or may send a check or direct a family foundation or donor-advised fund to Docs In Progress, P.O. Box 7728, Silver Spring, MD 20907.

January 17: Deadline to Apply for 2017 Fellowship

February 2–March 2: Documentary Filmmaking from A to Z with Adele Schmidt

March 25: Filmmaking at Your Fingertips: The Smartphone Documentarian with Larry Engel

Documentary Inspiration Award Honoree to Premiere Next Film at Sundance
Ramona Diaz (2016 Documentary Inspiration Award Honoree) will premiere her film Motherland in the world documentary competition at the 2017 Sundance Film Festival. The verite film takes us in the heart of the planet's busiest maternity hospital in the Philippines. Docs In Progress Executive Director Erica Ginsberg had the honors of facilitating a private focus group for the film jointly with Women in Film and Video earlier this year.

Fellow Premieres Web Series on Iraqi Refugee Experience
John Filson (2014 Fellow and Roundtable Alum) is releasing a web series Fate We Make about an Iraqi refugee family who resettled in Silver Spring, Maryland. Escaping war to search for a better future in America, can this husband, wife and three daughters overcome challenges in their new world they never imagined and still keep the family together? Follow the series at fatewemake.com

Alums: Don't be left out. Send your news to monica AT docsinprogress DOT org

Stone Soup Films is Seeking an Executive Director
Stone Soup Films is thoughtfully and strategically preparing for and implementing an executive transition process. They are currently seeking a dynamic leader to take the organization to the next level. Candidates for Executive Director should have the capacity to build on 8 years of success by leading staff, sustaining and enhancing programs, increasing funding, and ensuring Stone Soup Films continue to meet critical community needs.
For more information and to apply.

WIFV/TIVA Holiday Party
Shake off the winter doldrums with good food and great company from across the DC-area film community. Our colleagues at WIFV and TIVA are co-hosting this post-holiday party on Friday, January 27 at the Harman Center for the Arts in Washington DC. Tickets are $40-60 with additional discounts for WIFV and TIVA members and students. Registration includes food, drink, and a chance to win a door prize. Find out more.

Film Independent Documentary Lab - Deadline to Apply January 9
Through a series of meetings and workshops, Film Independent's Documentary Lab provides creative feedback and story notes to participating filmmakers, while helping them to strategize for the completion, distribution, and marketing of their films. Application to the Lab is open to any director of a feature-length or hour-long documentary film at the rough-cut stage at the time of application. Find out more.

Fifth Annual Bethesda Film Fest Accepting Submissions Through January 4
Filmmakers from Maryland, Virginia and Washington, DC are eligible to submit a short documentary (5-30 minutes in length). Films must have been completed within the last two years, all topics are eligible. A film by a young filmmaker, under 18 years old, may also be chosen. Selected filmmakers are required to attend the formal screenings March 17 and 18, 2017, at Imagination Stage in downtown Bethesda and speak about their work. Filmmakers whose films are selected will receive a $500 honorarium.Young filmmakers will receive a $250 honorarium.
Find out more.

Check Out Our Revived DC/Baltimore Documentary Film Calendar
Want to know what festivals are happening and where docs are being screened around the Washington DC and Baltimore areas at movie theaters, museums, cultural centers, embassies, and think tanks? Bookmark our Screening Calendar.

New Core Application Launched: The Documentary Core Application is a collaborative effort by grantors who regularly fund documentary projects to standardize application requirements as a commitment to a more filmmaker-friendly way of grantmaking. Launched by the Sundance Institute and the International Documentary Association, the project initially consists of a core proposal checklist that filmmakers can use to create a single proposal template that will satisfy primary requirements of participating grantors. The next phase will explore standardizing other elements such as work sample lengths, budgets, and grant reporting requirements. Docs In Progress is proud to endorse the Core Application. Find out more.

Upcoming Funding Deadlines
Note that some are limited by geographic or other requirements. Please read guidelines carefully.

Want to see the full list of funding deadlines and more information on funders?
We now have a permanent place on our website which you can bookmark to see a full list of funding and pitch deadlines and get links to more information on major film funders. You can access the page for free as long as you sign in to our website
Here's the link to bookmark: http://www.docsinprogress.org/funding_for_documentaries

When to Say No to a Festival (The Film Collaborative)

Enter the Edit: Activating Feelings of Immediacy and Intimacy With a Film (POV Blog)