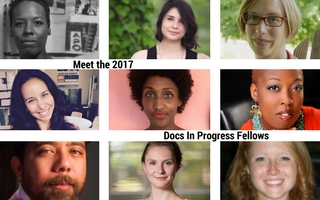 Now in its fifth year, this Program brings together up to ten emerging documentary filmmakers from across the Washington DC/Baltimore Metropolitan area for an eight month Fellowship. Selected through a competitive application process, these ten Fellows represent a variety of professional backgrounds, documentary styles and subject matter, and stages of development of their current documentaries-in-progress.

The Fellows will participate as a cohort in a series of monthly meetings from February through September 2017 where they will come together to share and hold each other accountable for progress on these current projects, and have a facilitated discussion with each other and with special guest speakers about issues related to the documentary landscape, work/life balance, and the creative process. They will also attend the Full Frame Documentary Film Festival.

This program is made possible in part through support of the National Endowment for the Arts and the Academy of Motion Picture Arts and Sciences.

Meet the 2017 Docs In Progress Fellows and their current films:

MICHELLE AGUILAR - Washington DC
Michelle received her Masters in Social Documentation from UC Santa Cruz. She has produced numerous non-fiction multi-media projects in cultures and communities across the world. After serving as a Peace Corps volunteer in a rural indigenous community in Panama, she later returned to produce El Cacao which played at the Margaret Mead, Big Sky, the Environmental Film Festival, and was nominated for an IDA Award. She is the Director of Production for Meridian Hill Pictures.
Fellowship Project: No Place To Grow about what happens when migrated farming traditions and livelihoods intersect with urban gentrification.

JEANETTE BILES - Washington, DC
Jeanette has a dual background in media and education, with a career span which includes working as a director and producer in live sports with NFL, NBA, and WNBA; building a broadcasting magnet program in Tulsa’s public school system; and teaching arts and advocacy for DC Promise Neighborhood Initiative and DC Achievers. Her passion is telling the stories of Black Americana.
Fellowship Project: Black Mardi Gras introduces us to the intense and iconic personalities who produce the annual social balls and parades in New Orleans.

CARLA BROWN - Catonsville, MD
Carla is an interdisciplinary artist who uses photography, printmaking and film to visually examine themes about gender, race and family. She currently works in the Department of Exhibitions at the Maryland Institute College of Art. Her recent work focuses on both her maternal and paternal grandparents – both as individuals and in terms of their direct influence on her life.
Fellowship Project: Everyone But Two: The Life, Love & Travel of Benjamin and Frances Graham, a project where the filmmaker retraces the steps of her grandparents who spent 35 years traveling by trailer to every state in a racially divided United States.

YI CHEN - Washington, DC
Yi has been producing stories for television, print, web and radio since 1999 and is an Adjunct Faculty at George Mason University’s Film and Video Studies Department. Her first independent documentary Chinatown looked at the strength and struggles of the contemporary Chinese American community in Washington DC’s Chinatown and won awards at festivals throughout the U.S., Canada, and China.
Fellowship Project: Chinese-Americans For Trump (working title) follows several Chinese-American immigrants who have supported the candidacy and now presidency of Donald Trump, reflecting another dimension of how demographic shifts in the U.S. are exposing surprising nuances in the electorate.

GABRIELLA GARCIA-PARDO - Washington DC
Gabriella is a documentary filmmaker and visual journalist who specializes in work on conservation, innovation, and overlooked stories. She produces, shoots, and edits short form documentaries for National Geographic's various digital platforms. Prior to this work, she has taught high school students about filmmaking, led trail rides on horseback in Chile, and worked on NPR’s Music team shooting live shows, Tiny Desk Concerts, and Field Recordings.
Fellowship Project: Gunpowder Girls introduces us to a group of Moroccan women who are challenging stereotypes by competing in a traditionally male display of horsemanship and riflery called tbourida.

KAITLIN LANGE - Arlington, VA
Kaitlin is a business development and communications specialist at Cortina Productions where she is responsible for telling the company’s story through their website, business proposals, and social media. Prior to that, she worked as a cultural coordinator for the Sons of Norway and lived for a time in Australia where she wrote travel pieces. She is graduate of The Institute for Documentary Filmmaking, a program of the Documentary Center at George Washington University.
Fellowship Project: Nasty Women starts with a phrase uttered during a 2016 presidential debate by then-candidate Donald Trump. As Trump starts his first year in the White House, has a new wave of feminism arrived or will the women’s movement be set back decades?

KIMBERLY McFARLAND - Washington DC
Kimberly is a documentary filmmaker and educator with a passion for character driven, authentic storytelling. Her career in media began as an editorial writer in Singapore at ContentAsia, reporting on broadcast media across the Asia-Pacific region. She has also worked with Meridian Hill Pictures and Sitar Arts Center on youth media projects, Stone Soup Films in operations and development, and now is a producer with 522 Productions.
Fellowship Project: Meeting Mom is a deeply personal narrative which explores what it means to lose one’s mother early in life.

KRYSTAL TINGLE - Arlington, VA
Krystal has a background in news writing and reporting, public relations, and international aid work whose experiences reflect the intersection of filmmaking, faith and culture through a global lens. Her work has taken her to Jamaica, Kenya, Spain, and, most recently to South Sudan where she produced short docs about women micro entrepreneurs.
Fellowship Project: Oh Happy Day! takes us on a song’s unlikely journey from a humble church basement to an international Billboard hit during the height of the civil rights era.

SUSANNE UNGER - Washington DC
Susanne grew up in Germany and studied anthropology and film studies in Canada and the United States. She holds a PhD in linguistic anthropology, has taught at Duke, Kenyon, and William and Mary, and is currently a linguistic anthropologist in residence at American University. Her research has explored the intersection between film education and civic education programs for youth in Germany. Susanne also has a passion for radio and belongs to the radio collective DC Listening Lounge.
Fellowship Project: Shepherds at the Crossroads explores the lives of those who hold on to the ancient tradition of pastoralism while struggling to maintain their mode of making a living in the 21st century.