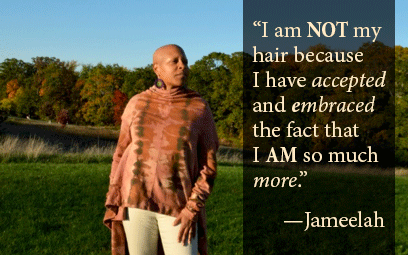 Alyscia Cunningham (2016 Fellow) began filming subjects while working on her second book, I Am More Than My Hair: Bald and Beautiful Me, a social-change photography project paying tribute to girls and women who have lost their hair involuntarily. Along the way this became a new journey of discovery. 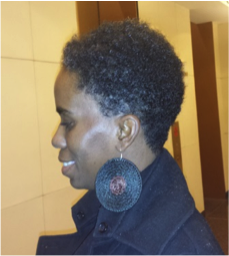 In October of 2014 I embarked on a new journey, my second book and first documentary.Because of my experience with participating in the “Big Chop To Stop Cancer” combined with my personal struggle with beauty as a child, at that time I gave birth to I Am More Than My Hair: Bald and Beautiful Me.

It will include images, video footage and the stories that girls and women face from baldness. Most participants in my project are bald due to medical conditions, but I’ve also included females who’ve cut their hair in support of a loved one who’s lost their hair or lost their battle to cancer.

At first Bald and Beautiful Me was simply a personal project. I wasn’t considering publishing it given that I planned on focusing on another project idea at the time. I figured I would post inspirational photos with quotes to help empower women.

Along my journey, and after deciding to publish the photos into a book, I captured video footage of a few participants. My plan was to edit the videos for the crowdfunding campaign I launched in order to fund the photography book.

One of the participants, and also my biggest supporter and scout (for other participants), actually encouraged me to compile the video footage and turn it into a documentary.

What a great idea! This didn’t even cross my mind prior to our conversation.

As excited as I was to completely dive into the new direction of filmmaking, self-doubt started to blanket my thought process.

I literally had to walk myself out of my thoughts and push through the doubts. Once I made the decision to do the documentary, the Universe opened opportunities for me to continue. One of the biggest platforms thus far has been my acceptance into the 2016 Docs In Progress Fellowship Program.

Soon after, I connected with a few filmmakers who provided me with information for various film festivals. Although I am not yet at the point to submit to film festivals, or even sure if that’s the direction I’ll choose to go, because of the instant reassurance from doors that opened the path of opportunity, I have no doubt that I am headed in the right direction.

My hope is that in turn I Am More Than My Hair will provide a platform that will empower girls and women to feel beautiful despite their baldness or regardless of what the media tells us is attractive. If I’ve done that, the internal conflict I’ve experienced before and even through my journey is well worth the push I’ll continue to give myself as I move forward.

Congratulations to Alyscia who recently received funding from the Arts & Humanities Council of Montgomery County to support the book portion of this transmedia project.