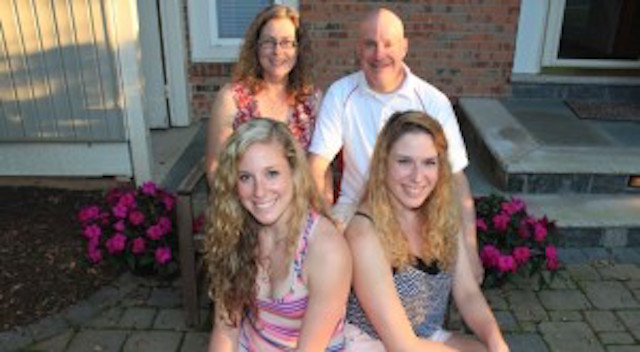 "I realized that the good-natured drama of me negotiating with my daughters was more engaging than any script I could concoct."

Bonnie Rich (2015 Fellow) is our guest blogger this month. She has turned the camera on herself and her family for a humorous exploration of culture, faith, and identity in SEARCHING FOR MY JEWISH SOUL.

Making a scripted movie during a family vacation seemed like a fun idea when I pitched it to my husband and two daughters who were seven and ten at the time. There were the woods and mountains of West Virginia, we could make costumes with sequins and sparkly glitter and everyone, especially me, could live out our dreams of being movie stars. This was the late 90’s in the days before YouTube.

I sold the idea and one of my first movies, HanSolo and Gretel, was born.

Imagine Star Wars characters living out a plot loosely based on Hansel and Gretel. I made the girls dress up in homemade Star Wars costumes during our hikes. Or at least I tried.

“Mom, do we have to wear these costumes on the whole hike? It’s so embarrassing,” they protested.

“Fine, we’ll put them in a backpack and you can change when we get to the waterfall.” My compromise.

The movie is a mixture of intentional and unintentional bad. It is also a family memory that reminds me of quote from a wise yoga teacher, “You have to start by starting.” I showed it to my family, friends and coworkers. They laughed. I made more movies. They laughed some more and introduced me to folks who paid me to make videos and my career as a producer was launched.

Over the years, my style changed to personal documentary and I realized that the good-natured drama of me negotiating with my daughters was more engaging than any script I could concoct.

Mother/daughter banter is the center of my current work-in-progress, Searching for My Jewish Soul. I’m Jewish. My husband is Jewish, and we raised our daughters with a weekly dose of Hebrew school and summers filled with Jewish camp. But we have floated away from synagogue since their Bat Mitzvah celebrations.

I feel a family obligation to reconnect to Judaism but my daughters, now in their twenties, don’t care so much. Still, I was surprised when they revealed to me that religion doesn’t seem relevant enough for them to force it upon my unborn grandchildren.

Now I’m on a quest to awaken my inner Jew and convince my daughters that Judaism is not boring and irrelevant. On this journey I want to include my grandfather’s audio oral history, my recent obsession with yoga, cooking demos, eating demos, synagogue shopping, singing, praying, rabbis, singing rabbis, a healer, my yoga teacher, my parents, and cute little kids.

I was stuck on how to squish all these ideas into one story, so after thinking about it for months, I found a deadline to meet – the Docs in Progress Fellowship application – and put a teaser together.

At Docs in Progress I met individually with Executive Director, Erica Ginsberg who provided wonderful advice and most importantly gave me encouragement that folks beyond my friend circle would be interested. She along with many other thoughtful folks I’ve met through the Docs In Progress Fellowship and other programs have showered me with positive energy, smart ideas and support that I’m truly grateful for. I have realized that perhaps my daughters think I am nutty, but the idea of making the film is not.