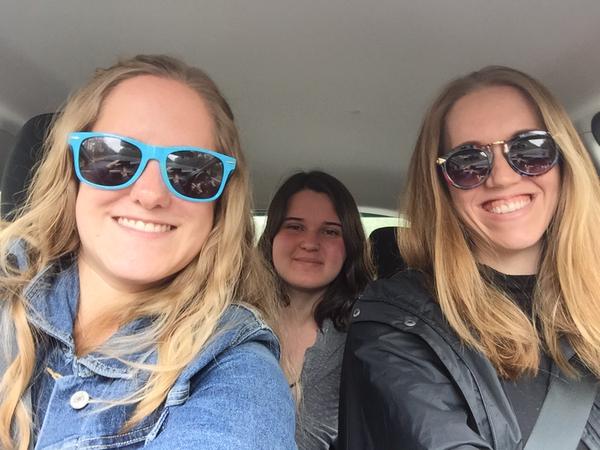 2015 Fellow Emma Mankey-Hidem recently attended several film festivals as part of planning for the life of her own film BLUE RIDGE BARNUM. "The biggest benefit, especially for anyone who will eventually be submitting their own film to festivals, is just to get a sense of what different festivals are looking for."

This year, I have had the good fortune to attend both South by Southwest (aka SXSW) and Full Frame. And I will be attending AFI DOCS in the coming weeks. Going to festivals is obviously fun, but it’s especially important for someone like me who is early on in my career and who has a film in post-production that I will start submitting to festivals in a few months.

One of the obvious benefits of attending festivals is the networking.  Festival networking in my experience has felt more meaningful than just going to a happy hour or something where you talk to someone for 20 minutes and exchange cards. Of course you’ll meet people in that context at festivals too, but you’ll also spend significant amounts of time with some people over the course of days who have the potential to

become lifelong friends and amazing professional advocates for you.

SXSW in particular, because of its length and intensity, was a great bonding experience. I have compared it to “summer camp for adults.” When you’re going going going all day for several days, the intensity of this experience really helps to cement friendships. For example, on Tuesday, I went to a birthday party for a person I had only first met at the opening party the Friday before, and that for me very much encapsulates the magic of SXSW.

Education is a big component. Many festivals have panels, sessions, or workshops, where you can learn new things specific to your goals. I packed my SXSW with panels and sessions, almost all of which I found quite useful. While I didn't attend the sessions at Full Frame since I was seeing lots of films, I also heard good things about them.

The biggest benefit though, especially for anyone who will eventually be submitting their own film to festivals, is just to get a sense of what different festivals are looking for. At Full Frame, I watched ten features and four shorts over the course of four days (it was supposed to be 13 features but I learned that my limit is three  feature films a day). I felt that I really got a sense of Full Frame’s programming style and the kinds of things they were interested in.

Of course, festival programming trends change from year to year. It depends a lot on what kinds of things they receive that year and many other factors. But if you want to get your film into festivals, it’s probably good to attend a few first to get an idea of what they’re looking for.

One thing I took away from all the films I saw was to get out into the world and talk to people. A lot. Learn their stories. Some of the best films I saw had truly unique access to interesting subjects, often sort of by luck and because the filmmaker took advantage of meeting the right people at the right time. In (T)Error, the subject is an FBI informant who happened to be the filmmaker’s neighbor. In The Wolfpack, the filmmaker happened to walk by them on the streets of New York.

I stumbled across my own subject on a road trip through Virginia and was so glad I had the courage to contact him about making a film. My film, Blue Ridge Barnum, is about a quirky artist named Mark Cline who creates large fiberglass roadside attractions like monsters, dinosaurs, pirates, giants, and anything else people want him to make. He’s a whimsical guy with a dark side, fascinated by the things that frighten us, thinking they’re just misunderstood (perhaps a bit like himself). If you’ve ever heard of Foamhenge, a foam replica of Stonehenge, Mark was behind that. It was an April Fool’s prank that became so popular, he left it up. I followed Mark through the ups and downs of a year of his career, including his first ever museum show and also a massive fire that burned most of his own attractions to the ground (Foamhenge survived, if you’re wondering).

After attending SXSW and Full Frame, I left feeling like my film would fit in especially well at SXSW. They seem to like films with artsy themes and Mark is a quirky, larger-than-life character, much like the SXSW Festival itself.  My film might be a longer shot for Full Frame.  All the films I saw there were incredibly well-funded, not very DIY at all, and there seemed to be a particular quiet, meditative aesthetic that they really liked. Mark Cline is definitely not a quiet, meditative man and my film does not have that aesthetic.

But I guess we’ll see. My film should be finished in the early Fall and then I will start applying to festivals. Hopefully next year you'll get to meet Mark on the big screen somewhere on the festival circuit.