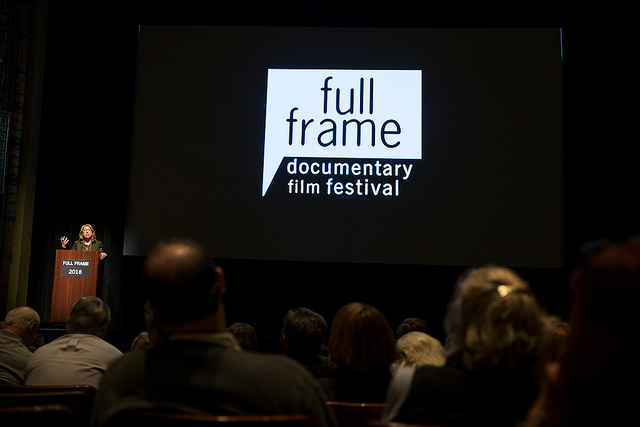 Ray Whitehouse was one of ten 2018 Docs In Progress Fellows to attend the Full Frame Documentary Film Festival. He arrived early on Thursday morning and left late on Sunday night. He reflects on all the time he spent in the middle.

On the evening of Sunday, April 8, as I watched Steve James’ America to Me, it occurred to me that I was exhausted. I was at the Full Frame Documentary Film Festival as part of the Docs In Progress Fellowship program and, over the last four days, I had done nothing particularly physical: mostly sitting in dark rooms watching films and then conversing with fellow attendees about what we had seen. This fatigue was instead of an emotional sort. The films I had seen were so well-made that they demanded me to open my heart and go on a journey. The topics varied but each film served as a reminder of our solidarity as human beings. I found this reminder such a gift.

Below are a few other observations from attending the festival.

There is beautiful innovation happening within the documentary form. Films like Thy Kingdom Come, On Her Shoulders, 306 Hollywood and Hale County This Morning, This Evening were a few of the many films at Full Frame that enlarged the idea of what a documentary could be. Each film interrogates one or more aspects of the documentary form while still telling an engaging story. I left these films with a degree of wonder as my sense of the possible had increased.

I was heartened to find that a focus on increasing diversity was central to this year’s festival programming. It matters who is behind the camera. When stories are told by a largely white and a largely male perspective, the quality of storytelling suffers. One of the Full Frame programs, the #DocsSoWhite Speakeasy, was a sobering and challenging conversation. It raised important questions about improving diversity in a meaningful way and reflecting on how a filmmaker’s identity impacts the way a story is told. All Speakeasy sessions are on the festival’s Vimeo page.

It was remarkable to see a film that successfully wove the filmmaker’s own story into a larger story. For good reason, much has been written about Bing Liu’s Minding the Gap, but I’d be remiss if I didn’t mention it. Liu’s ability to deal with his deepest challenges through film requires a degree of openness and bravery that is so inspiring. He allows the audience to see him undergo as large a transformation as any of the other participants in the film.

The festival left me with a deep sense of gratefulness. I was impressed by how many non-filmmakers attended the screenings and asked thoughtful questions. Seeing these engaged audiences gave me a renewed hope that documentary film might have the power to move hearts and minds. And in talking with a few of the filmmakers, I was grateful for their candor and words of affirmation. All in all, there is a duality to my feelings about the festival. It was at once an event that provided me with so much inspiration to continue making films but also served as a forceful reminder to continue reckoning with how to better myself both as a storyteller and as a human.

Ray Whitehouse is a documentary filmmaker based in Washington DC. He attended the 2018 Full Frame Documentary Film Festival as one of ten Docs In Progress Fellows.