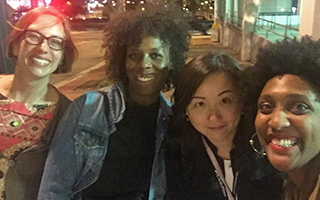 The Full Frame Documentary Film Festival may have celebrated its 20th year, but it was all fresh for a group of Docs In Progress community members. 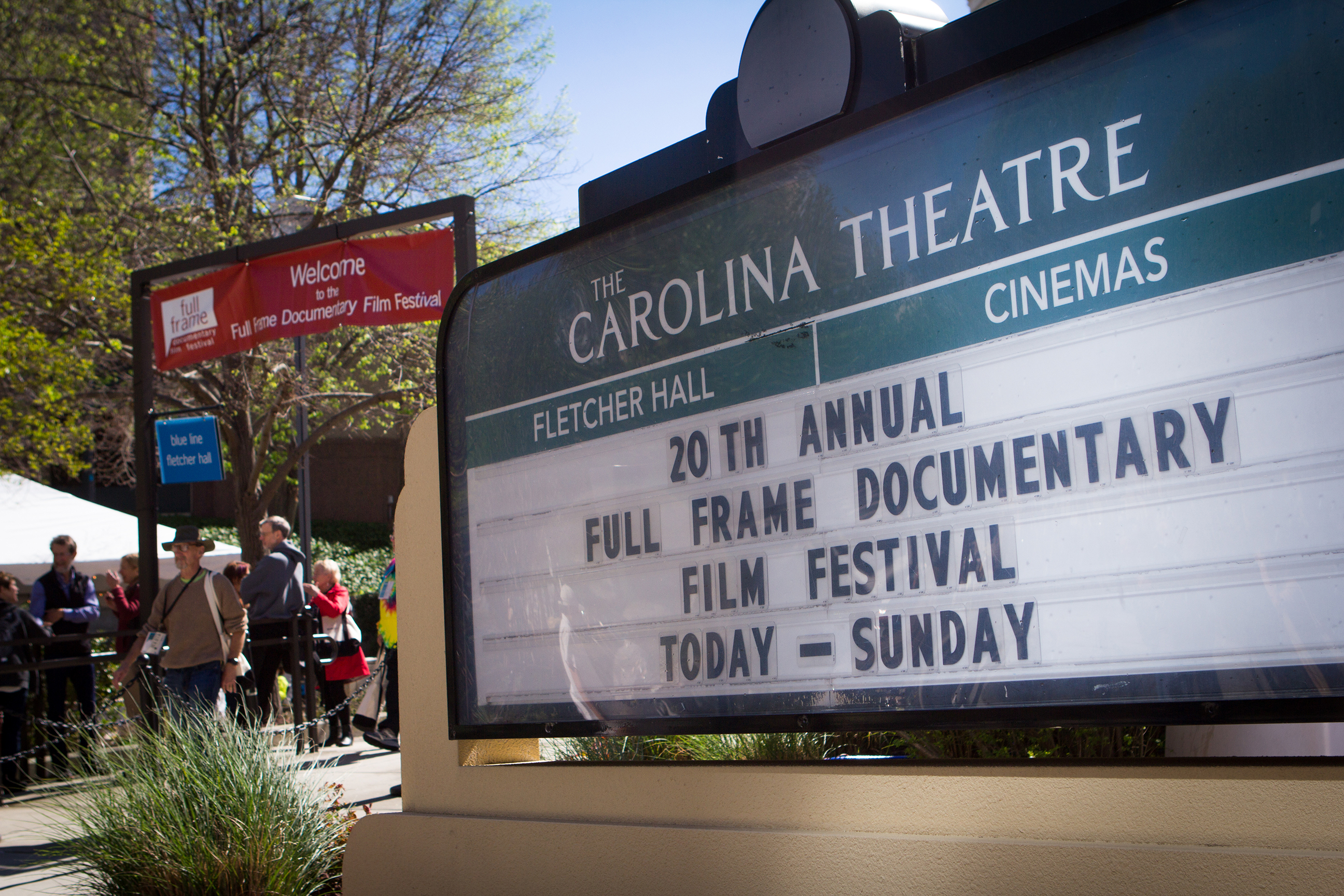 For four days each spring, the Full Frame Documentary Festival draws an international crowd of filmmakers and film lovers from around the world to Durham, North Carolina. 2017 marked the festival's 20th anniversary. It also marked the first year that Docs In Progress was able to bring all ten of our Fellows (thanks to support from the National Endowment for the Arts).

As we made the trek south in carpool caravans, we braved a torrential storm and tornado warnings that engulfed the east coast on our trip down. Yet in spite of this soggy beginning to the festival, it did not succeed in dampening the experience, which was a first for many in our group including myself.

I have attended other film festivals but have often heard that Full Frame is a “Filmmakers' Festival.” My expectations and enthusiasm were already pretty high but truthfully the festival did not disappoint. Fellow Carla Brown had never been to a film festival before so she came without any set expectations, but felt "Full Frame was a great opportunity to see what happens after all the hard work, and to see the community that is built from within the film world."

Full Frame created an engaging atmosphere with its small setting, warm hospitality and well-organized venues. Add to that Durham’s regional charm and the transition into festival enthusiast was, for me, effortless. Fellow Yi Chen observed “Even to a first-time attendee, Full Frame feels like a big family. I would never have imagined that one day the Docs In Progress group would sit at the same table with D.A. Pennebaker and Chris Hegedus enjoying Carolina barbecue and clapping for award winners.”

There is indeed an overarching sense of community that permeates the festival. Beyond the quality and diversity of the films, I was impressed by the easy connection to other festival participants, and the casual but pertinent conversations you fall into while in line, over lunch,or after a Q&A. Several Fellows found themselves running into peers and meeting up with filmmakers they had met in line or at a screening. "It was inspirational to talk to other filmmakers and learn about their trajectories," commented Fellow Susanne Unger, "I met a number of filmmakers whose work really resonated with and inspired me, and look forward to keeping in touch with them in the future." 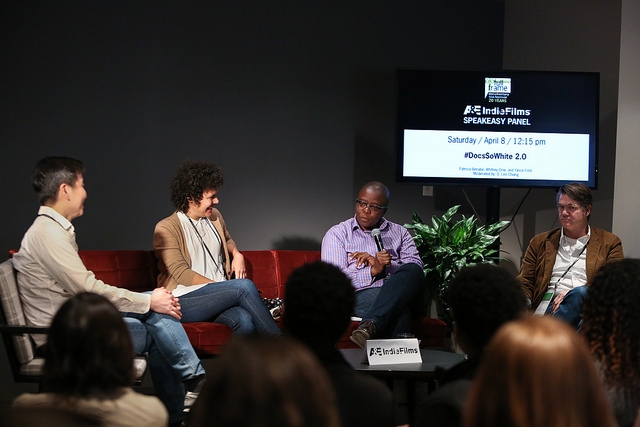 Another opportunity to expand on these incidental conversations was the organized "Speakeasy," free panel conversations presented by A&E IndieFilms. The setting for the Speakeasy Conversations was small and intimate, allowing for greater access to seasoned filmmakers and industry leaders. The Speakeasies took on topics such as media's role in the current political climate and sustainability of documentary filmmaking as a career, but it was the one on representation and diversity which was cited by many of our Fellows as particularly relevant. The panel focused on many timely topics including representation, agency, and authorship in doc film, and asked the questions of 'Who gets to tell whose story?' and 'How do we diversify the world of documentary filmmaking?'

"It is really great that Full Frame provided the platform to continue this important conversation," said Yi who added, "As an Asian American nonfiction filmmaker not based in New York or California, I sometimes feel alone and isolated working in DC [which has a relatively smaller community of Asian American documentary filmmakers]. Going to a festival like Full Frame gave me the opportunity to connect with others in the Asian American documentary community." And connection to the filmmaking community is so vital to fuel and nurture one's creative motivation.

How Full Frame addressed diversity and representation also made an impression in Carla. "The thing that stood out to me the most was the need for more diversity in the filmmakers and in the stories themselves. As a filmmaker that is African American, I naturally gravitated to stories told by and about the African American community, and I was blown away by the compelling stories that I watched. After watching a weekend of emotionally heavy films, I questioned whether or not the playing field is even in regards to interests and funding for a broader range of stories that come from the African American community."

As a Latinx involved with disability issues, I also found myself gravitating towards films that are important to me. There were plenty of wonderful films to choose from which also made one appreciate the extent of Full Frame's programming. They truly reached out across the spectrum of diversity. By setting this tone of inclusion, through films and filmmakers is where I truly saw where Full Frame gets its reputation as a Filmmakers' Festival.

Our trip was made possible by a grant from the National Endowment for the Arts, and we certainly hope we will be able to offer this opportunity to the 2018 fellowship. Being hopeful, the 2017 fellows made some recommendations for next year's fellows: 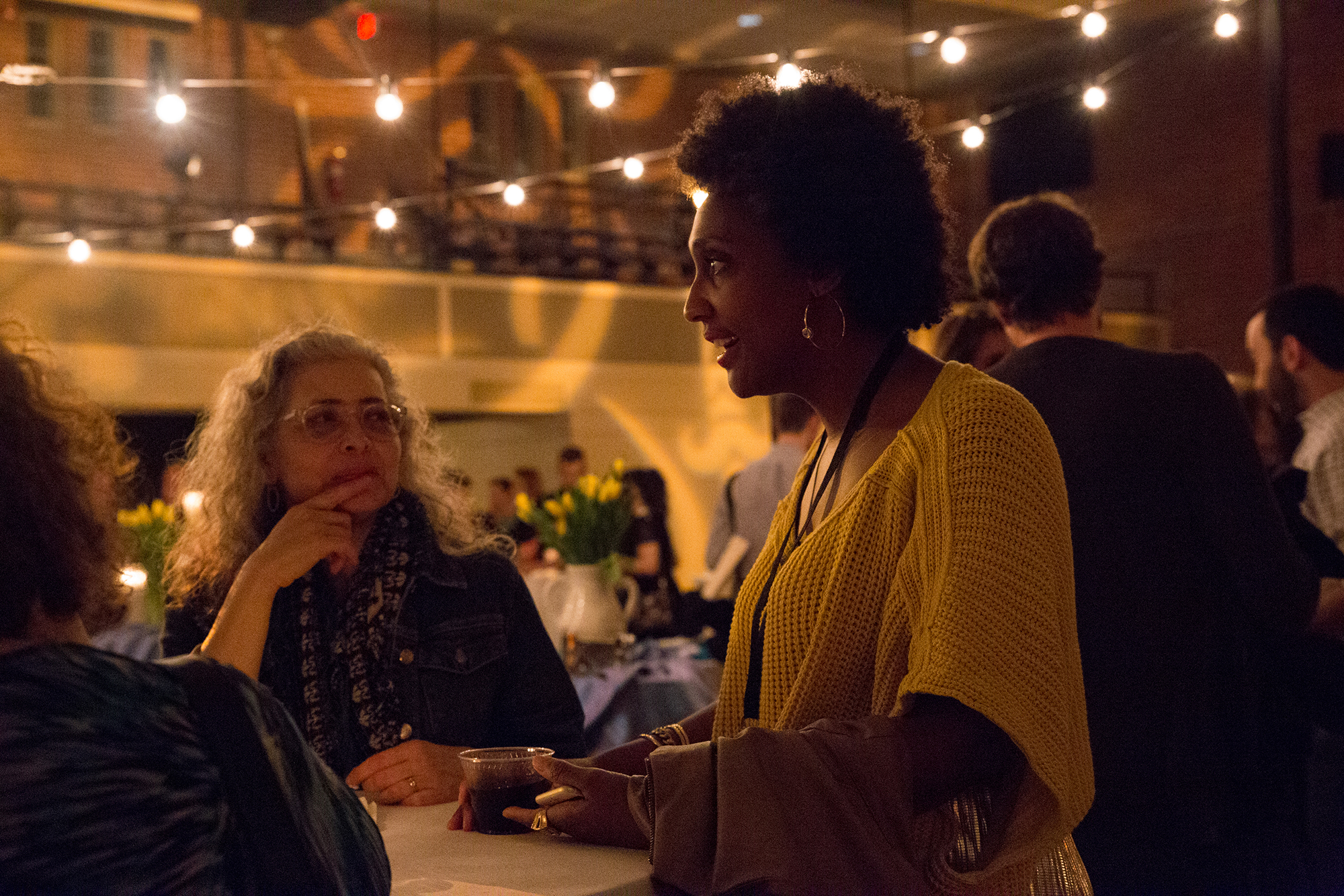 Not to be understated, Full Frame is a lot of fun! Social opportunities like the opening night party, awards barbeque, outdoor screenings, and just chatting with filmmakers and film fans under the tent on the plaza are not to be missed. The majority of the theaters are located in and around the convention center. Getting around is easy. And Durham itself is a great setting. Beyond the convention center is a revitalizing city center with an array of restaurants, bars, and cafes. Four days just didn't seem enough to participate in everything I was interested in, so planning your trip is definitely a must.

Truth be told, I came home exhausted. But even now, I am thinking about what I will do next year. It was an inspiring festival that left me buoyant with creativity not only about filmmaking but also about creating community.

The Carolina Theater, one of the venues for the Full Frame Documentary Film Festival. Photo courtesy Full Frame.