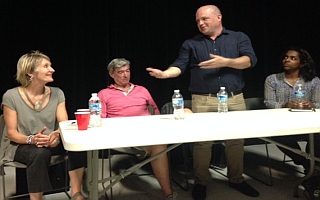 "We are so much more than our voices. We are our choices." This was just one takeaway from several of the top voiceover artists in the Washington DC region when they came together to speak at a Documentary Roundtable in May 2016 about how documentary filmmakers can work with talent. The joint WIFV/Docs In Progress Roundtable was held in partnership with WIFV's Talent Roundtable.

The speakers for this panel included voiceover artists Melissa Leebaert , Craig Sechler, and Christopher Walker.  Between them, they have worked for producers creating content for National Geographic, Discovery, PBS, BBC America, A&E, and Smithsonian Channel. Keila Woodard, Supervising Producer for Investigation Discovery, provided the perspective of someone who has directed voice-over sessions. More than 50 people attended the panel, and we have compiled the top tips from the evening.

What are the key skills of a quality narrator?

1. Cool under pressure, especially when adapting to script changes or speaking to picture.

2. Has a visual brain. This doesn't just mean the ability to see the word on paper, but the ability to envision images in your head which go inside the story.

3. Honors the writing. An OK narrator recites lines. A top notch narrator tells a story with pacing and dimension. You must be inside the writer's mind and heart.

4. Is creative. A narrator should feel free to try different readings to give directors options and feel like you are providing an added dimension to the story.

5. Understands timing. Timing is everything in narration. A pro knows how to adjust pace to still sound natural but ensure the director won't have to recut the film to match the narration.

How can documentary filmmakers help voiceover artists be the best they can be?

1. Give them time to live with the content. If the VO artist is not reading to picture, make sure they have the script and the rough cut at least two days before the recording session so they have time to rehearse to picture and familiarize themselves with the content and tone.

2. Give them some context. Make sure the VO artist knows if any music in the cut is a temp track or the final music. Scratch track narration can also be helpful to give them a sense of timing.

3. Create a safe space for collaboration. The directors can be next to the actor, not across from them so it feels less confrontational.

4. Don't settle for what doesn't seem right. If a read is not working, stop the take. A professional VO artist wouldn't take it personally. That said, when offering feedback on a read which didn't work, say something along the lines "I wonder what would happen if..."

5. Be constructive with feedback. Sometimes new directors have difficulty conveying what they want. In finding ways to give constructive feedback, think about where on a scale of 1-10 you might like juice, pathos, and smiliness. Verbs can sometimes be more effective means of conveying what you want rather than emotions.