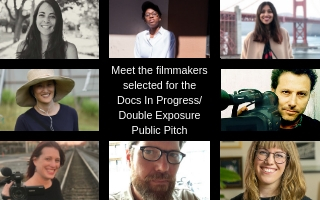 Six projects originally presented at Peer Pitch programs around the country have been selected to return to Washington DC for an industry pitch. The pitch will take place Friday October 11 as part of the Double Exposure Investigative Film Festival.

The selected projects hail from across the United States and were selected from nearly 50 documentary works-in-progress presented at Peer Pitch programs over the past year.

The pitching filmmakers will present their projects to panels which include representatives from across the documentary landscape, including funders, festivals, and online and broadcast outlets. While this is not a traditional pitching forum, it is an opportunity for presenting filmmakers to get valuable feedback from those who have their pulse on the documentary market.

The selected projects are:

Buying Time (Filmmaker: Sara Barger)
As a Virginia family faces their 10-year old daughter's brain cancer, they are doing everything they can do to keep her alive and alleviate her pain, including breaking federal laws by buying cannabis products and having them shipped across state lines.

Dark Summit (Filmmaker: Amy Marquis)
A mountain climber was one of the first people to take Mefloquine, an antimalarial drug with side effects that have included nightmares, anxiety, hallucinations, and psychosis. More than 25 years later, he's on a mission to search for medical answers, expose the extreme consequences of this drug, find peace and acceptance in his limitations, and, against doctors' orders, attempt to reclaim his mountain career.

The Long Rescue (Filmmaker: Jennifer Huang)
Several teenage girls rebuild their lives in a clandestine shelter for survivors of child sex trafficking in Cebu, Philippines. Over five years, we witness them re-entering the world, only to confront the same poverty, predators, and pimps of their childhood. Can they graduate and reach their dreams, or will they slide back into exploitation?

The Norteños (Filmmakers: Rodrigo Dorfman and Peter Eversoll)
After decades of living as immigrants in the United States,“Norteños” (as they are known in Mexico), bring a piece of “El Norte” back with them to help start their new lives in the tiny town of Cheran in rural Michoacan. From opening a Bojangles-styled fried chicken restaurant to replicating a southern suburban home, they work to translate the USA back in Mexico.

Queering the Map (Filmmakers: Cai Thomas and Serena Ajbani)
The personal and collective queer histories of Los Angeles, New Orleans, and Montreal come to life on a documentary walking tour lead by individuals in each place who connect the importance of space and place with their own stories.

Undue Burdens (Filmmaker: Andrea Raby)
The Midwest Access Coalition works to help make abortion services accessible to women in states and localities where TRAP laws and other restrictions have forced many women to have to travel hundreds of miles to the nearest clinic. They carry on a legacy begun by the Chicago Abortion Counseling Service, nicknamed Jane, in the years prior to Roe v. Wade.

The pitch will take place on Friday, October 11 between 9:45 am - 12:15 pm. The pitching filmmakers will present their projects to an industry panel that include representatives from across the documentary landscape, including funders, festivals, and online and broadcast outlets. While this is not a traditional pitching forum, it is an opportunity for presenting filmmakers to get valuable feedback from those who have their pulse on the documentary market. The pitch will also be open to those attending the festival's Symposium. If you don't already have a pass to attend the festival and symposium, see below on how to get a special discount.

This program has been made possible through the support of the National Endowment for the Arts and a partnership with The D-Word, Sebastopol Documentary Film Festival, RiverRun International Film Festival, Columbia College Chicago, and Double Exposure Investigative Film Festival.

Passholders attending the festival's Symposium may sit in on this Industry Pitch as observers.