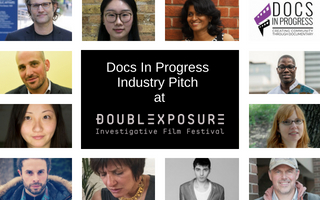 Nine projects originally presented at Peer Pitch programs around the country have been selected to return to Washington DC for an industry pitch. The pitch will take place Friday October 12 as part of the Double Exposure Investigative Film Festival.

The selected projects hail from across the United States and were selected from nearly 50 documentary works-in-progress presented at Peer Pitch programs over the past year.

The pitching filmmakers will present their projects to panels which include representatives from across the documentary landscape, including funders, festivals, and online and broadcast outlets, including representatives from POV, Frontline, New York Times Op/Docs, Al Jazeera Witness, IDA Enterprise Fund, the Fledgling Fund, the Tribeca Film Festival, and the Environmental Film Festival in the Nation's Capital. While this is not a traditional pitching forum, it is an opportunity for presenting filmmakers to get valuable feedback from those who have their pulse on the documentary market.

The selected projects are:

Chasing Westboro
by Adam Villani (Chicago, IL)
A queer Jewish filmmaker embeds himself with the Westboro Baptist Church, a Kansas-based church best known for picketing celebrity and military funerals to spotlight its hatred for homosexuality, non-Christians, and anyone who is not like them.

The Collaborator's Son
by Jason Osder and Will Youmans (Washington DC)
In 1985, an explosion kills an accused Nazi collaborator in New Jersey. Today, his street lawyer son fights to clear his father’s name and bring the killers to justice.

Downwind
by Lois Lipman (Santa Fe, NM)
Tina Cordova, a remarkable businesswoman and cancer survivor turned activist, is catalyzing a people's movement in southern New Mexico. Tina and a chorus of rural mothers are demanding to be heard more than 70 years after the Trinity blast, the world's first atomic bomb test, was secretly detonated in their backyard in 1945.  “Downwinders” have silently suffered generations of cancers and are now taking their case to the U.S. Congress.

Finding Yingying
by Jiayan "Jenny" Shi (Chicago, IL)
A Chinese family arrives in Illinois to search for their daughter, an international student who was kidnapped and is presumed dead. Facing unexpected challenges as foreigners in an unfamiliar country, the heartbroken family tries to find closure by any means as the murder mystery unfolds.

First Vote
by Yi Chen (Washington DC)
The film chronicles the unexpected political journeys of three new Americans living in battleground states as they embrace democracy and freedom of speech in a divided America.

Gullah Gone
by Denise McGill and Sherard Duvall (Columbia, SC)
On St. Helena Island, South Carolina, African Americans have been farming and fishing their land since the Civil War. Now they must choose whether to sell their pristine coastline to retire in luxury, or find a way to preserve their way of life for their children.

The Hive
by Edgar Barens (Chicago, IL)
Plunge headlong into death row at the Ely State Prison in Nevada, where the reward for surviving one day is the punishment of the next. As the paint dries on a new execution chamber and a fresh supply of lethal drugs is secured, one prisoner volunteers to be the first to die – and the rest await their fate.

Our Daughters
by Chithra Jeyaram (New York, NY)
A single white mother chooses an Indian American couple to be her twin daughters' adoptive parents. Eight years later, what can this unusual extended family teach us about transracial open adoption?

Peer Pitch and the Docs In Progress Industry Pitch are supported in part by the National Endowment for the Arts.

Passholders attending the Double Exposure Investigative Documentary Film Festival Symposium may sit in on this Industry Pitch as observers. Learn more and get passes here.