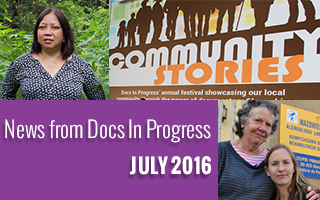 News from Docs In Progress including announcement of this year's Documentary Inspiration Award Honoree, Open Submissions for Community Stories Festival, our Next Work-in-Progress Screening, and More on our Summer #Docspiration Campaign 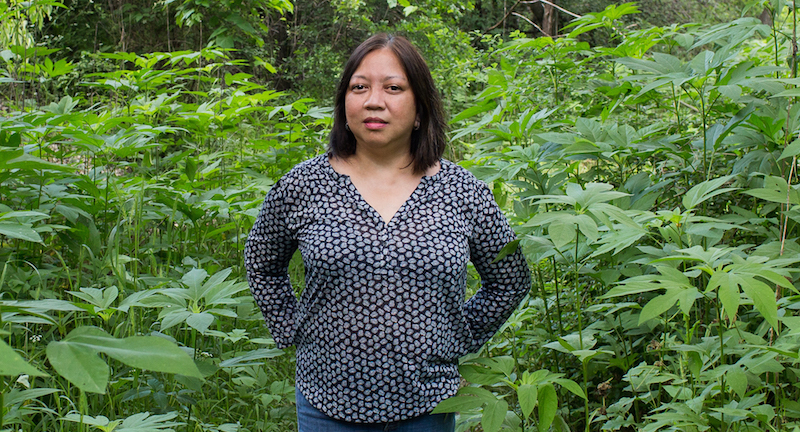 We are pleased to announce that this year's Documentary Inspiration Award recipient will be Ramona Diaz. An award-winning documentary filmmaker based in Baltimore, Ramona is someone who has never forgotten her own roots while creating character-driven documentaries which have universal appeal. Ramona has also been a mentor to many emerging documentary filmmakers, helping them navigate the documentary industry. Just this past week, she was inducted into the Academy of Motion Picture Arts & Sciences.

We are excited to welcome her for a special evening program on Thursday, October 20 at Landmark's E Street Cinema in Washington DC. In an intimate master class conversation, Ramona will discuss her career path to directing some of the most renowned documentaries of the past decade, including Don't Stop Believin: Every Man's Journey, The Learning, and Imelda. Following the conversation, we will honor her with the award, and screen Imelda, the documentary which helped put her on the map.

Now in its second year, the Documentary Inspiration Awards honor individuals whose work and contributions to the field are an inspiration to the documentary community. Last year, the inaugural awards were given to Marshall Curry and Matthew Hamachek.

Tickets are now on sale for this year's Inspiration Awards. We are also offering VIP Passes (which include a private reception with Ramona plus a ticket to the Awards) exclusively as a perk on our #Docspiration Summer Crowdfunding Campaign.
Community Stories Festival Open for Submissions 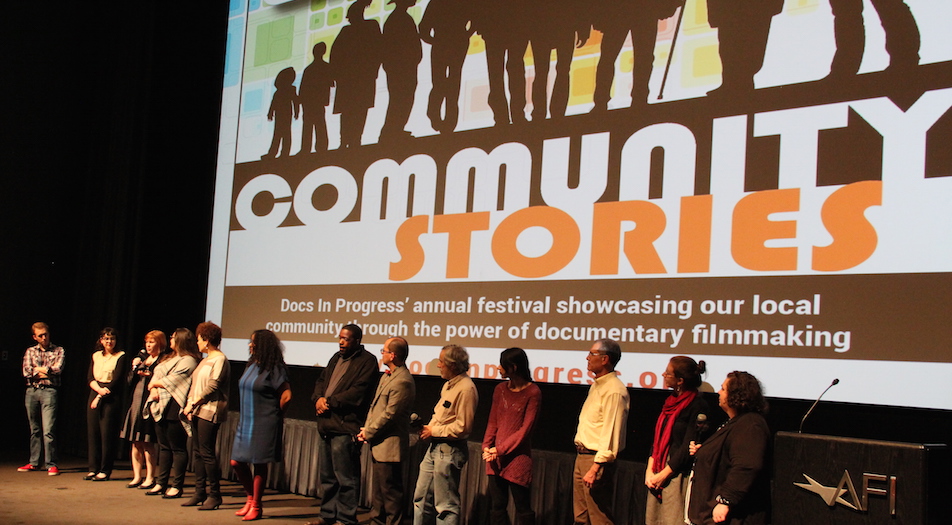 Have you produced a documentary about a local community or about any kind of community in transition? Consider submitting your film to our Community Stories Festival. This annual festival is dedicated to telling the stories of community with an emphasis on Montgomery County, but we also accept films about other local communities and, this year, will be accepting films on other communities in transition. We are particularly interested in shorts between 3-20 minutes, but will accept longer films too. This year's festival will take place in mid-November (exact dates to be announced soon). Films about Montgomery County can receive a submission fee waiver if you use Waiver Code CSMOCO2016. Deadline to submit is July 31.
Find out more and submit on Film Freeway.
Have you Donated Yet to Docs In Progress During Our Summer Campaign?

From the outside, it may seem like Docs In Progress is a large nonprofit with a lot of resources at our disposal. In reality, Docs In Progress is small. With a staff of one full-time person and two part-time people joined by a cadre of contract teaching artists, and a highly dedicated group of board members and volunteers, Docs In Progress offers more than 50 programs and services each year which reach more than 1500 documentary filmmakers and other community members. All on an annual budget of less than $200,000! More than 15% of that modest budget comes from people like you.

While we may be small, we are mighty. And that is also why we have embraced crowdfunding. It gives even the smallest of donors the ability to be mighty by joining forces with other mighty donors to add up to make a collective impact on Docs In Progress. So far this year, we have raised more than $3,000 from online donations and checks from individuals and businesses. Our goal is to raise another $12,000 by the end of July.

Funds will go towards supporting our free and near-free programs like the Roundtables, Community Stories Festival, these E-Newsletters, and the program which started it all for Docs In Progress 12 years ago - our Work-in-Progress Screenings.

As an added incentive, we have perks available for every interest, with brand new offerings this year, including t-shirts, consultations, graphic design services, and All-Access Passes to all our programs for a full year. Whether you give for a perk or give because you believe in what Docs In Progress does, we appreciate your support. Learn more and make a donation today.

A big thank you to these mighty ones who have already contributed to Docs In Progress this year: 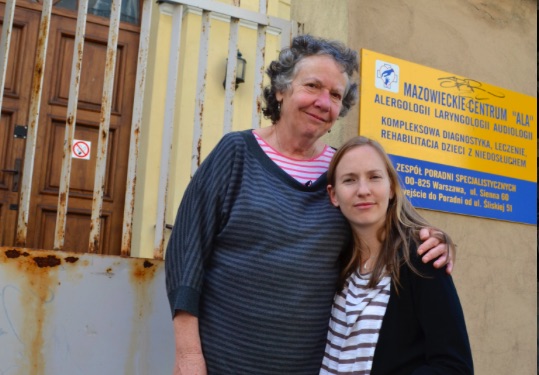 We are pleased to announce that our next Work-in-Progress Screening will take place on Wednesday, August 3 at the George Washington University in Washington DC in partnership with The Documentary Center. Filmmakers and film lovers are invited to join us at this workshop-style screening of a not-quite-finished documentary and participate in a facilitated workshop-style feedback session with the filmmakers to help them get to the next stage of completing and distributing the film.

The film being screened is My Dear Children by LeeAnn Dance and Cliff Hackel. The film follows one woman's journey from South Africa to Poland and Ukraine to discover the truth her father never wanted to talk about - a humanitarian tragedy which pre-dated the Holocaust. 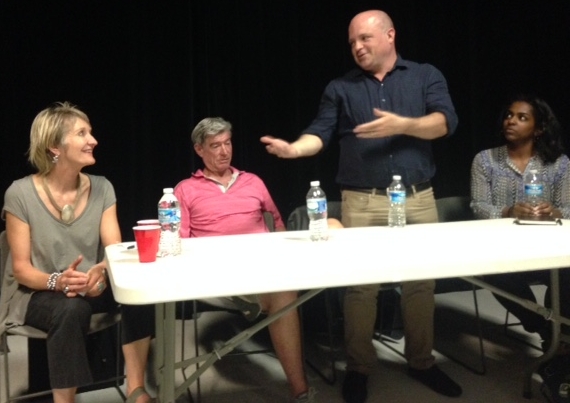 "We are so much more than our voices. We are our choices." This was just one takeaway from several of the top voiceover artists in the Washington DC region when they came together to speak at a WIFV/Docs In Progress Documentary Roundtable in May about how documentary filmmakers can work with talent.
Read more

The next free Documentary Roundtable is tonight (Monday, July 11) and features Amy DeLouise discussing how to work with real people on camera - whether doing interviews or re-enactments.
RSVP Now

July 14: Houseparty in DC to Raise Funds for Docs In Progress

See our full calendar at http://www.docsinprogress.org/calendar 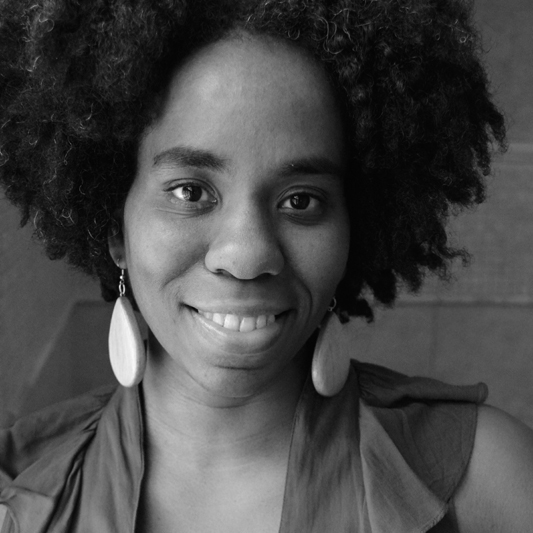 2016 Fellow Alyscia Cunningham began filming subjects while working on her second book, I Am More Than My Hair: Bald and Beautiful Me, a social-change photography project paying tribute to girls and women who have lost their hair involuntarily. Along the way this became a documentary project and a new journey of discovery for Alyscia. Read more.

Rooftop Launch Party for Kol Hanashim July 28
We are excited to hear that current Fellow Yisrael Welcher will be hosting a launch party for the trailer and Indiegogo campaign for his work-in-progress Kol Hanashim (Voices of Women), on the rooftop of the Embassy Row Hotel on Thursday, July 28. The trailer will screen hourly from 6:00–9:00 pm and will be followed by Q&A. Plus enjoy the DJ, drinks and beautiful sunset views. RSVP is required.

Exotic Premieres in Washington DC August 28
Fresh off all the helpful feedback at our January Work-in-Progress Screening, 2014 Fellow Amy Oden has completed Exotic. The film will premiere in Washington DC on August 28 on the main stage of the Black Cat. $10 for the event with a partial benefit for the local org Helping Individual Prostitutes Survive. Find out more.


Attention Alums!
Make sure we are updated on your successes with funding, festivals, broadcasts, or more. E-mail Monica Sanjur your news to [email protected] by the last day of the  month to be considered for inclusion in the next month's newsletter.

Cine PitchFest: Do you have an idea for A&E?

This fall, A&E is giving 25 producers the opportunity to pitch dream project to industry executives. CINE PitchFest Presented by A&E will be held in New York, Los Angeles, San Francisco, Austin, and Washington, DC. At each session, five producers will make their best pitch. Panelists will critique each presentation and select a session winner, who will be invited to a formal pitch meeting with A&E execs. Visit www.cine.org/pitchfest for complete rules, FAQs and links. Producers of every skill level with original content may apply. All applications are due by August 12, 2016.

For the fifth year straight, our friends at TIVA are holding their new/used gear yard sale. In the past, it's been a great opportunity for folks to unload gear that's gathering dust, be it production gear, post-production gear, or any flotsam related to the film/video/audio industry. For folks who need gear, it's a chance to see the gear in person, talk to the owner, and hopefully make some handy purchases. Find out more.

Produced by the International Documentary Association and the Academy of Motion Picture Arts and Sciences, Getting Real is a 3-day international conference which brings the documentary community together for three days of inspiring keynotes, vital conversations, practical workshops, dynamic presentations, insider knowledge and structured networking. Earlybird rate until July 17. Learn more.

ITVS Offers Webinars on Crafting a Competitive Application for Funding
In the month leading up to the Open Call deadline, ITVS' Programming Department will be hosting a series of webinars to help prospective applicants. these include sessions on writing the treatment, creating competitive work samples, budgeting, and a live chat to answer other questions. Find out more.

Have you been too busy to keep up with what's been going on in the world of documentary? No worries. We now have a permanent place on our website which you can bookmark to keep up with the latest articles and blogs of interest. You can access the page for free as long as you sign in to our website (with the same e-mail address where you are receiving this e-mail). Among the latest features:

We now have a permanent place on our website which you can bookmark to see a full list of funding and pitch deadlines and get links to more information on major film funders. You can access the page for free as long as you sign in to our website (with the same e-mail address where you are receiving this e-mail).

Find out more at http://www.docsinprogress.org/funding_for_documentaries